A win for Next workers in Sri Lanka!

After months of fighting for Next to formally recognise the FTZ & GSEU Trade Union within the Next Manufacturing Ltd (NML) factory, workers from the NML factory in Sri Lanka have finally secured victory! We can celebrate with all the workers who have fought for their right to join a union and refused to give up in face of a reluctant management.

Next has confirmed recognition of the FTZ & GSEU Union as representative of its workers in the NML Katunayake factory and will engage with them in collective bargaining. We now look forward to the union and NML having a full Recognition Agreement, and expect NML to fully engage with the union on workers’ issues. As the third wave of Covid 19 in Sri Lanka is severely affecting factory workers, now more than ever, brands including Next must ensure workers’ voices are listened to and included in measures to protect their health.

“Next NML agreed to recognize our union as the sole bargaining agent of the employees at the Katunayake FTZ plant. This is an achievement of joint action starting from NML employees, and solidarity from UK Trade Unions and labour rights organisations. It shows that when workers are determined to organise collectively with other workers, nationally and internationally, they will not be defeated. The Next employees’ struggle is particularly inspiring, as employers are trying to use the pandemic to bust unions. Despite this, employees were able to sustain their unity under tremendous pressure. We would not have been able to achieve this victory without the solidarity extended by UK trade unions and other organisations, coordinated by War On Want and Labour Behind Label. The Free Trade Zones and Employees union salutes all the comrades who supported this struggle. We hope to continue this solidarity for our mutual benefit.”

This victory demonstrates the power of international solidarity.Thousands of activists joined War on Want, Labour Behind the Label and the Pay Your Workers/Respect Labour Rights campaign for union recognition, amplifying workers’ demands and ensuring that Next received the message that they must respect workers’ rights. To the activists from across the world who signed petitions, sent a letter, or picked up the phone to tell Next to recognise the union: Thank you. Together we are strong and can secure worker wins!

The Pay Your Workers/Respect Labour Rights campaign is supported by a coalition of more than 225 trade unions and labour rights around the world and aims to push brands such as Next to sign to a binding agreement negotiated with union that commits them to ensuring their workers receive their full wages or severance during the pandemic and their right to organise is protected. The NML workers are not alone in their struggle, all over the world, workers who stand up to protest against non-payment of wages or risks to their health during the pandemic face increased union-busting, discriminatory dismissal or even force. The NML workers’ struggle is an inspiration for the many garment workers fighting for the recognition of their right to stand up for themselves and shows why brands need to take responsibility to ensure the voices of the workers in their supply chain are heard. 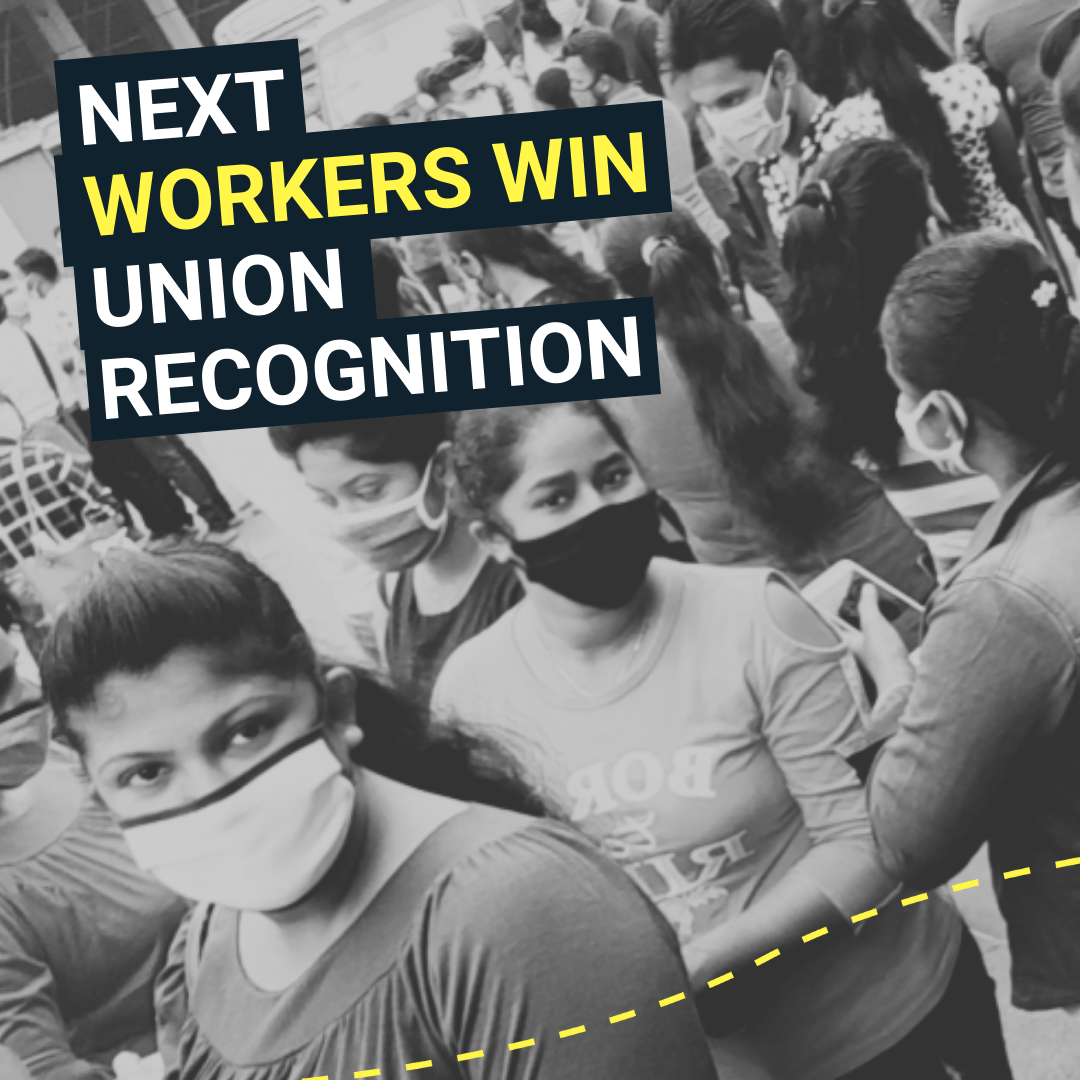