Bangladesh Accord on Fire and Building Safety is renewed 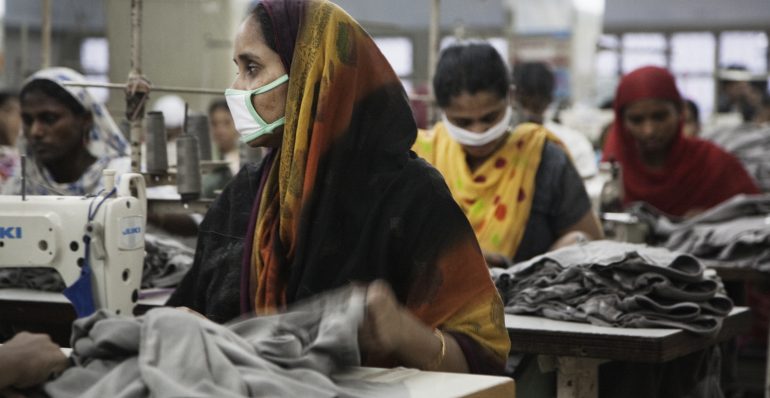 Labour Behind the Label is pleased to announce that today, the global union federations Industriall and UNI announced an agreement with brands and retailer representatives on the language of a renewed Accord on Fire and Building Safety in Bangladesh. The agreement has so far been signed by the UK brand Primark as well as Kmart Australia, Target Australia, H&M, Inditex (Zara), C&A, Otto, KiK, Aldi South, Aldi North, Lidl, Tchibo and LC Waikiki. A further eight brands have committed to signing and more will follow.

The Accord is the groundbreaking building safety agreement based on binding commitments by apparel brands to ensure that hazards in their factories are identified and corrected. The Accord has overseen factory renovations – from installation of fire doors to strengthening of dangerously weak structural columns – that have improved safety for millions of garment workers.

The new Accord, which takes effect in May of 2018 when the current Accord expires, extends the program for an additional three years. This means the continuation of robust, independent safety inspections to ensure that progress achieved under the first agreement is maintained and that factory owners cannot return to the unsafe practices of the past.

The new Accord, like the first, is an agreement between unions and apparel brands and retailers, and also includes, as “Witness Signatories,” four non-governmental labor rights organizations: the Clean Clothes Campaign, the International Labor Rights Forum, the Maquila Solidarity Network and the Worker Rights Consortium.

Said Ineke Zeldenrust of the Clean Clothes Campaign, “The renewal of the Bangladesh Accord ensures the continuation of the most effective program to ensure the safety of factory buildings in the contemporary era of global garment production. The Accord has generated more than 100,000 documented safety improvements in more than 1,500 apparel factories, employing more than 2.5 million garment workers.”

“The Accord is the antidote to the voluntary industry auditing schemes that failed miserably to protect workers in the years leading up to the catastrophic Rana Plaza collapse,” said Scott Nova, Executive Director of the Worker Rights Consortium. “The Accord model replaces voluntary promises with enforceable commitments, ensures severe economic consequences for suppliers that refuse to operate safely, and requires brands to make sure their suppliers can afford needed renovations. The renewal of the Accord is a testament to the effectiveness of this model.”

Said Judy Gearhart, Executive Director of the International Labor Rights Forum, “We are urging the brands and retailers sourcing from Bangladesh to sign the new agreement. We believe that every genuinely responsible company will do so.”

The purpose of the extension is to ensure that the progress achieved under the first Accord is maintained and that workers in more factories are brought under the Accord’s umbrella of protection, as signatory brands and retailers add more factories to their supply chains. The new Accord also aims to support improvements to Bangladesh’s public regulatory regime.

The purpose of renewing the Accord for three more years is not to give factories currently engaged in safety renovations additional time to complete this work. All covered factories have existing corrective action plans with deadlines, all of which expire well before the end of the first Accord in May of 2018. The Accord inspectorate will hold factories to these deadlines.

For workers, the new Accord features notable improvements to the original, including a mandate that factories pay severance when they close or relocate due to safety issues, protections for union members who face retaliation from their employer when they advocate for improved safety, and enhancements to the dispute resolution mechanism, which holds brands accountable to their commitments.

Said Gearhart, “The new Accord does not have every improvement the unions and NGOs would have liked, but it keeps all critical elements of the original and adds valuable new provisions.”

The new Accord also opens the door to a possible negotiated expansion of scope, to include factories that make related products like home textiles and footwear, as well as thread and cloth. Such factories are outside the scope of the current Accord, leaving their workers unprotected. “We welcome the language in the new agreement that allows for potential negotiations to cover factories outside the current scope of the Accord”, said Zeldenrust.

Said Lynda Yanz, Executive Director of the Maquila Solidarity Network, “The Accord has not yet met all of its goals, but it has already distinguished itself as a huge advance over all the initiatives that preceded it. The agreement has unquestionably been challenging to implement and it has encountered many bumps in the road, with renovations running well behind schedule in many instances. However, the progress achieved is real, it involves tens of thousands of documented safety improvements and it has reduced risks for millions of workers.”

Nova added, “On labor rights in supply chains, rhetoric often substitutes for action, and the kind of concrete and objectively measurable progress for workers the Accord has produced is in short supply. That is why it was vital to renew the agreement.”