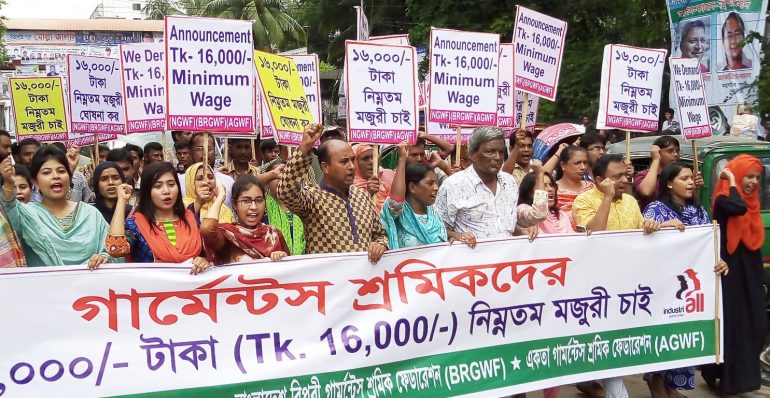 This week, workers in Bangladesh resorted to a hunger strike as part of their continued struggle for a better minimum wage in Bangladesh.

The action, organized by the National Garment Workers Federation (NGWF), serves as a stark reminder that the recently announced new minimum wage of 8,000 taka will leave many workers and their families hungry and unable to cover basic living costs.

Clean Clothes Campaign members and partners around the world, including LBL, issued statements of solidarity with workers on hunger strike and others in Bangladesh who have united behind the demand for a 16,000 taka minimum wage. The 8,000 taka (95 USD) new monthly minimum wage which was announced by the government has been called ‘outrageous’ and was said to show ‘complete disregard for legitimate workers’ unions.’ The IndustriALL Bangladesh Council and other workers’ representatives have repeatedly communicated the 16,000 taka demand to the Minimum wage board, along with the demand for a statutory framework to govern pay grades and promotion and other welfare measures, but without success.

Following the government’s unilateral declaration of the 8,000 taka minimum wage – to be in effect as of December 2018 – it became apparent that workers would not only be deprived of a living wage but would suffer additional negative consequences because the share of the basic wage component in the total minimum wage has been decreased. That means workers would be forced to accept poverty wages as well as a lower basis for the calculation of overtime, severance pay and service and retirement benefits.

Labour Behind the Label supports the workers’ union call for an immediate review of the announced amount so that the share of the basic wage is increased rather than reduced, and so that the new minimum wage is set at 16,000 taka, which is the minimum amount workers need to meet their families’ basic needs.

“This situation throws the spotlight on the hypocrisy of many major brands that source from Bangladesh. We have been in contact with 25 of them in the past months. They all tell consumers that they respect the right to a living wage, and they pay lip service to the importance of workers’ voice in determining wage levels – yet they have failed to show the leadership we have been asking for in terms of supporting the workers. Nevertheless, we are once again renewing our call for other brands to join Inditex in publicly supporting the 16,000 taka minimum wage demand,” said Ineke Zeldenrust of Clean Clothes Campaign.

Take H&M, for example, as the biggest buyer from Bangladesh. This massive retailer, reporting billions of euros of profits, is the focus of the “Turn Around, H&M!” campaign for its failure to stay true to the commitment that 850,000 garment workers making H&M clothes would be paid a living wage by this year. Many of those workers are based in Bangladesh, and a vast majority of them are women. Research has shown that poverty wages — their current reality — increase the risk of gender based violence, among many other negative repercussions.

H&M keeps referring to the requirement that their suppliers pay at least the national minimum wage and stressing the importance of workers participation in determining wage levels, but it has still not publicly supported the Bangladeshi unions’ minimum wage demand, just as it has not stayed true to the specific living wage commitment made in 2013.

Want to act? Visit the “Turn Around, H&M!” petition and take action, and use your voice on social media to express solidarity with the workers in Bangladesh and say #WeDemandTk16000.