24 April marks two years since the Rana Plaza building collapse in Bangladesh, the deadliest disaster ever in the global garment industry. A total of 1,134 people were killed and thousands more left seriously injured.

Rana Plaza was an eight-storey building housing five garment factories. The day before the collapse workers noticed a large crack in the concrete structure. Many initially refused to enter but were coerced by their managers, through physical and verbal abuse as well as the threat of having one month’s pay docked.

Fearful of losing the income that their families relied upon, many went to work that day and paid with their lives. They were making the clothes that end up on our high streets, for brands including Primark, Benetton, Mango and Matalan.

At the time of writing, some international brands who sourced from Rana Plaza still refuse to pay a penny in compensation to the survivors and victims’ families. However their labels were found in the rubble, amongst the debris that tells of thousands of lives ruined.

For two long years the Clean Clothes campaign, alongside campaigning organisations and trade unions in Bangladesh and worldwide, have been calling for those retailers to pay up so that families living in desperate poverty have some chance to move on in life. Brands must be held accountable. Consumers can, and should, demand that change.

This is not about boycotting certain brands, or consumer guilt. It is about an awareness that garment workers need their jobs, but they deserve to work in safety and to earn enough to live in dignity. These are basic human rights.

This is not about boycotting certain brands, or consumer guilt. It is about an awareness that garment workers need their jobs, but they deserve to work in safety and to earn enough to live in dignity. These are basic human rights.

Though the scale of the Rana Plaza collapse is exceptional, sadly health and safety disasters are not uncommon in the garment industry. Factory fires, for example, often break out in buildings where the machinery is old, and garment workers die brutally in factories without any fire extinguishers, where doors are locked and metal bars are put on windows to ‘deter theft’.

Regardless of global brands’ CSR and PR-speak, workers’ safety still sits below profits as a concern for factory owners and the brands that contract to them. The unrelenting pace of fast fashion means brands expect new designs on their shelves every few weeks.

Factories compete to deliver large orders at fast turnovers, often subcontracting out when demand is too high, and offer their workers little in return beyond poverty wages and short-term contracts. Whilst the brands compete in a race to the bottom on price, corners are cut on factory safety and the human cost is high. 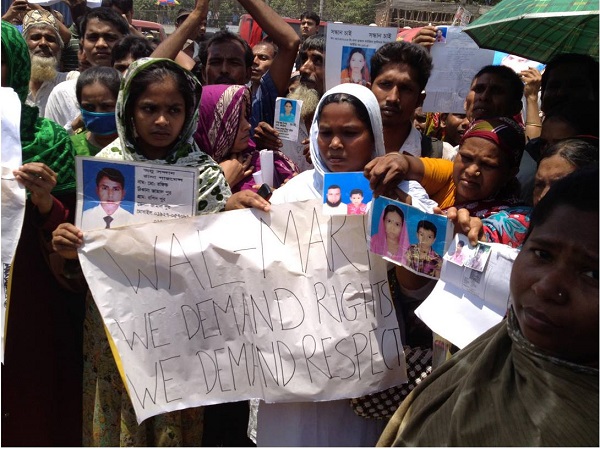 Activists stage a protest against Walmart on the first anniversary of the Bangladesh Rana Plaza disaster. Credit: Reuters

Issues of worker safety, however, cannot be looked at through an isolated lens. They are inter-connected with the need for a living wage. Denying workers a wage they can live in dignity on, one that covers their basic needs and allows for such things as medical care and the ability to send their children to school, also denies workers life choices, such as whether to enter the unsafe Rana Plaza building that fateful day. When your whole family is relying on your wage to live, there is little option but to go to work regardless of the conditions. This must change.

The garment industry is built on exploitation and inequality. At one end are the multi-millionaire CEOs, usually white, male and part of the 1%, earning their fortunes from the sweat, labour, and sadly sometimes the blood, of young women in countries such as Bangladesh, Cambodia and India. Approximately 80% of garment workers worldwide are women. Many have little education and few employment options. They work 14-16 hour days for poverty pay, regularly undertaking forced overtime just to make ends meet.

Often young women migrate from rural areas to cities for factory work in countries where the economy is built upon the garment trade. Given this reliance on foreign money, governments are unfortunately often unwilling to impose laws supporting a living wage for fear that brands will simply pull out and source from a cheaper country. Factories may pay the national minimum wage, however this normally falls well below what is needed to live in dignity.

Brands hold an enormous amount of power and need to work with factory owners to ensure a living wage is paid to workers. Factory owners, in turn, must work with local trade unions to ensure workers’ voices are heard, and freedom of association and collective bargaining rights must be upheld so workers are able to be honest about their situation and push for change without fear of reprisal.

Each of us is connected to the industry through the clothes on our backs, and as such, each of us can demand better from the brands we give our money to. Join our campaigns and add your voice. Write to them and ask what they are doing about implementing a living wage for workers throughout their supply chain. Tweet them and demand answers as to how they ensure freedom of association rights are upheld in the factories they source from. Let them know that you care about those who make your clothes.

Brands have a responsibility for all their workers, and a desire to listen when consumers speak en masse. Matalan, for example, initially refused to join a dialogue about compensation following Rana Plaza, and only capitulated and donated to the fund following intense campaigning and public pressure. This reiterates the need and power of collective action.

No-one should live in poverty for the price of a cheap t-shirt. Together we can create a sustainable and fair garment industry.

Ilana Winterstein is director of outreach and communications at Labour Behind the Label, a not-for-profit campaign which exists to improve workers’ rights. This opinion piece was first published in International Business Times, April 2015