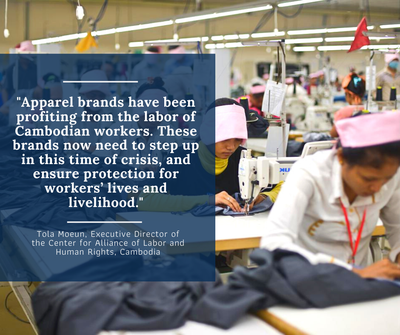 The new coronavirus has reached global pandemic levels and is affecting people across the world, including garment workers in global supply chains. Protecting those most at risk means both taking steps to limit exposure and ensuring that people surviving on the poverty line are not pushed below it. Due to their low wages and widespread repression of freedom of association rights, garment workers already live in precarious situations and the economic fallout of the pandemic is having far-reaching consequences.

We urge all clothing brands to take immediate proactive steps in their due diligence to protect workers who make their goods in the face of this global pandemic. Brands must take responsibility for workers throughout their supply chains and ensure that the garment workers who have made their profits possible do not carry the industry’s financial burden during this pandemic.

Due to COVID-19, many factories in garment-producing countries are closing because of a shortage of raw materials from China. As brands continue to reduce orders due to declining consumer demand and mandatory closure of shops, more factories will be forced to close. The spread of the virus and the necessary precautionary measures recommended by governments are bringing further closures.

Garment workers already earn poverty pay, with wages barely covering their basic needs, let alone leaving anything extra to cover emergencies or periods without work. These factory closures, whether temporary or permanent, are hitting low-paid garment workers hard – especially migrant workers who might not have local social networks to rely on and could face additional restrictions or xenophobia.

Media reports and direct information gathered through our network show that factories are closing or at risk of closure because of shortages of raw material, reduced orders, and public health concerns in a range of countries such as Sri Lanka, Bangladesh, Indonesia, Albania, and Central American countries.

“Garment workers live hand to mouth. If workers lose their jobs, they will lose their monthly wages that put food on the table for them and their families,” said Kalpona Akter, Executive Director of the Bangladesh Center for Worker Solidarity. “If workers are laid off, brands should ensure immediate payments to factories so that workers receive their full legally-owed severance.”

The situation has been especially dire for weeks already in Cambodia and Myanmar. According to reports from the media and our network, approximately 10% of garment factories in the Yangon region of Myanmar are now temporarily closed, and garment workers are not being paid their salaries. In Myanmar, workers are owed severance pay if the factory closure lasts beyond three months; however, severance pay itself only amounts to half a month’s salary per year employed in a factory, after an initial six months probation period. Many factories in Myanmar only opened in the past five years, and the turnover of workers is very high, meaning many workers will be left with nothing. According to media reports and information from our network, factory shut-downs are also being used to quell labour organising throughout the country.

Garment workers also fear that the coronavirus will impact on their right to paid public holidays. The Water Festival, the Myanmar New Year, is in April and is celebrated annually with a ten-day paid public holiday. This year public festivities have been cancelled due to infection fears, and workers worry that factories will not allow them to take the public holiday, instead counting any time off as unpaid sick leave.

The picture in Cambodia is similarly concerning, and tens of thousands of garment workers could lose their jobs in the coming weeks if the raw materials situation does not improve. Under Cambodian law, employers must seek authorization before suspending workers, and must pay them 40% of the $190 monthly minimum wage, with workers given an option of taking training courses to earn an extra 20% of their wage. Government reports now suggest that workers could receive 60% of the minimum wage for six months. However, some factories have suspended workers without authorisation. Many workers already live in debt, borrowing to make up for shortfalls in their low wages, and they are now in a position where they cannot afford their monthly loan repayments. Workers may have put their family’s land up as security for their loan and this is now at risk.

“Apparel brands have been profiting from the labour of Cambodian workers. These brands now need to step up in this time of crisis, and ensure protection for workers’ lives and livelihoods. Workers should be allowed to stay at home until the situation is manageable – and the brands need to ensure they are paid their full regular wage, attendance bonus, and room/transport allowance during this period,” said Tola Moeun, Executive Director of the Center for Alliance of Labor and Human Rights (CENTRAL).

Brands must stand by the workers who make their clothes and take active steps to ensure they continue to receive their wages during factory closures or sick leave. We are calling on brands to publicly commit to proper due diligence with regards to the unfolding events resulting from COVID-19. Specifically, in the time of a pandemic crisis, brands must:

Ensure that their supplier factories follow government requirements or recommendations regarding the suspension of large gatherings and close factories as necessary for the appropriate duration to protect the health of workers and their communities, while maintaining all workers’ contracts and payment of their full regular wages;

In times of fear and misinformation it is of vital importance to refrain from spreading unchecked information and make sure that all communication about the virus and its consequences is based on reliable sources. Brands should ensure that workers in their supplier factories are receiving accurate and current information from their employers.

In a period of crisis, strength can be found in solidarity and we are proud to be part of a global community. We stand with workers whose rights are violated every day and who are facing even greater economic battles due to this pandemic. The need to fight for workers’ rights continues, and in the shadow of this crisis the urgent need for a living wage looms large.