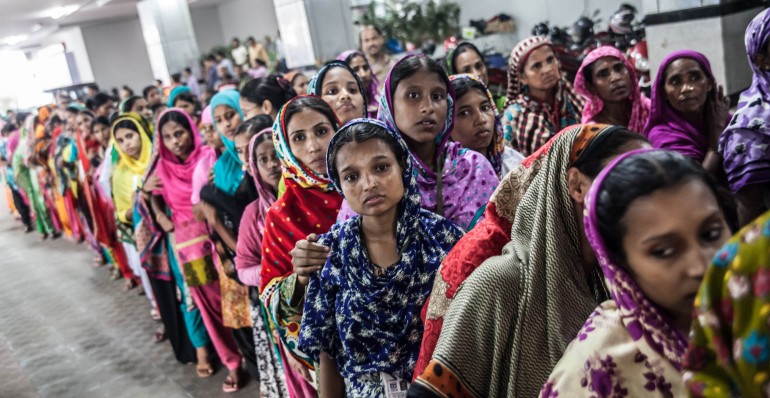 Behind the glamour of London Fashion Week and the aspirational images in glossy magazines is the reality of the global fashion industry: a grim picture of women living in abject poverty, struggling to survive whilst making the clothes sold on UK high streets for major fashion brands.

As consumers, many of us try to counteract this image by choosing to buy ethically. In the face of sweatshop labour headlines we may opt for the brand that seemingly has an ethical stance, hoping our money will reflect our morals. However, how can we be sure that this is the case? A lack of transparency throughout the garment and shoe industries mean that making ethical choices is not as simple as it may seem.

High street brands such as Marks & Spencer (M&S) and H&M proudly put their ethical credentials front and centre, with marketing for both brands focusing on good practice including eco collections, clothes recycling, sustainable sourcing and workers rights. Both brands have won plaudits for their ethics, with M&S receiving over 100 awards since launching Plan A, including being named ‘Most Ethical High Street Clothing Retailer’ by Ethical Consumer Magazine in 2014, winning consumer trust and increased sales.

Crucially, as poverty remains a key factor in maintaining the cycle of sweatshop labour, both brands have publicly declared a commitment to ensuring a living wage is possible for garment workers in their supply chains. In 2010, M&S launched their Plan A sustainability programme – pledging to ensure suppliers in India, Sri Lanka and Bangladesh were able to pay workers ‘a fair living wage’ by 2015. H&M is working towards paying 850,000 garment workers a fair living wage by 2018.

Yet are these ethics being played out on the factory floor? Do the workers actually making their clothes feel the effects of commitments to a living wage? We interviewed 150 M&S workers from eight supplier factories in Sri Lanka, Bangladesh and India, and over 50 workers from six H&M supplier factories in Cambodia to see whether the significant wage increase promised was being paid.

Our findings, in our new report ‘Do We Buy It?’, show that far from a living wage these workers are living in abject poverty, sharing slum housing in 3×3 meter shacks, with 2-3 other workers. Many have no running water and share outside toilets with up to 15 people. These women work 10 – 12 hours a day, 6 days a week and yet still don’t earn enough to afford the basics such as nutritious food or an education for their children.

Salaheya Khatun, a worker for a Bangladeshi M&S supplier says: “I am in debt by around 1000 taka every month because I need to pay for groceries and supplies on credit. It is difficult because if I had cash I could negotiate on the price, but I cannot negotiate when paying credit. Buying on credit feels like a disgrace…I just want to be able to support my family.”

Salaheya is not alone. In fact, we found that 60% of all M&S workers interviewed were living in mounting debt just to meet their basic needs. In Sri Lanka, M&S workers were earning on average £3.23 for a 10 hour day. Illegal levels of overtime were common, with women working up to 110 hours per month over their contracted hours, and still remaining in debt. One worker from India stated: “Our income is not enough. We don’t buy eggs, meat, fish or fruits because of high costs”

This is not the tagline to M&S’s award-winning Plan A sustainability roadmap.

So, what can we do to challenge the notion that brands can so wholly control their image through corporate social responsibility rhetoric?

We can demand transparency

M&S stated in the 2014 Plan A report that the commitment on supply chain living wage had been ‘achieved’, but they give no evidence to back this up. M&S use an internal process to evaluate their position, with no data or costs available. This lack of transparency, present throughout the garment and shoes industries, makes checking on the facts behind the statements virtually impossible. Similarly, H&M have not published a benchmark for the ‘fair living wage’ that they are aiming for is. Without this figure it is difficult to measure their success.

For consumers to truly be able to choose to shop ethically, we need to know that the human rights of the workers making the products are being upheld. We need to know by having access to data that proves it, not by simply being asked to believe brands who profit in the millions from the labour of the young, poor, migrant and uneducated women they exploit.

Brands need to publicly declare their benchmark for a living wage and share their factory supplier lists, their audit reports, and other important data such as wages paid per supplier by grade. We need to hold brands accountable to their promises. Only once they supply this information can their ethical marketing be taken as anything more than CSR spin.