Concerns raised over health impacts of chemical use in denim bleaching 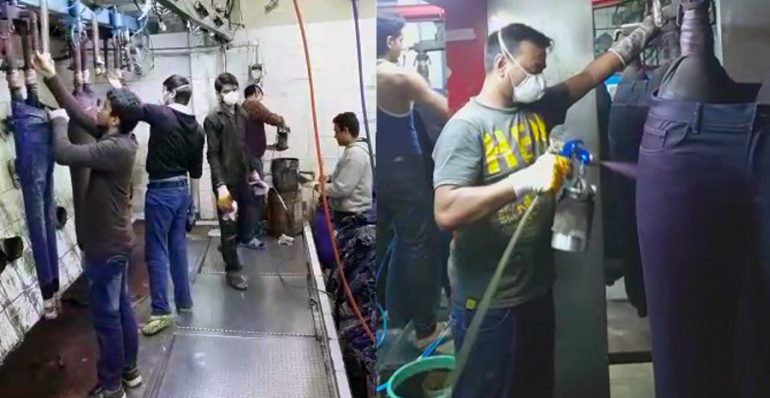 Labour Behind the Label is supporting international concerns raised over the impact of Potassium Permanganate on workers in the Turkish denim industry. An initial study into the impacts of the chemical, released in the UK this week, revealed workers using it in spray form to create the faded look in denim were suffering skin and respiratory problems.

Potassium Permanganate is now used in 90% of processes to create the bleached look in denim products sold across our high streets. Its use became widespread after sandblasting – the former technique used to fade denim – was shown to cause the lung disease Silicosis. The chemical is now applied to jeans and jackets by workers with spray guns in confined workshop spaces, often without appropriate protective equipment.

The chemical is classified as ‘dangerous’ by the European Chemical Agency and is said to affect the lungs if inhaled repeatedly, resulting in symptoms similar to bronchitis and pneumonia. Animal testing has also shown that repeated exposure to the substance causes possible toxicity to human reproduction or development [2].

Anna Bryher from Labour Behind the Label said: “This worrying report indicates the need for further investigation. Workers were shown to have lost their lives in the Turkish denim industry through dust inhalation 10 years ago. To replace this process with a deadly chemical and continue the risk of thousands of workers inhaling toxic substances seems incomprehensible. Regulation and action are needed to protect the people who make our clothes.”

Workers were shown to be provided with ineffectual dust masks rather than gas masks in their workplaces, but even then, equipment was rarely used.

One worker said: “I was ill 20 days ago. I was too weak to stand upright. Our workplace physician examined my lungs and said “Go and see a doctor in a hospital.” No hospital accepts patients here without an appointment. I couldn’t get permission from work. I thought maybe I could get an in without an appointment, you know because its an emergency, they can make an exception. But they didn’t, they sent me back.”

The denim bleaching workers also reported long hours, with a standard 12 hour day, 6 days a week. Most workers said they didn’t receive overtime until they had clocked up 72 hours of work – although local labour law says this should be paid after 45 hours. Workers reported monthly wages of 2000 – 3000 Turkish Lira (£280 – £420 a month), which is about a third of the value of a living wage needed to support a family in Turkey.

The report, published by the Turkish Clean Clothes Campaign, is the first of its kind conducted into the impacts of Potassium Permanganate on workers in Turkey. Abdulhalim Demir, a former Turkish denim worker who suffered lung problems, is the report’s author.

He said: “We lost 122 people to Silicosis as a result of work in the denim industry. Neither we nor the sector can handle another tragedy. We have to make sure workers are safe.”

It is based on interviews with a small sample of workers from 8 factories supplying international brands. The research is intended as a starting point to promote further medical investigation. Researchers are also calling on legislators to investigate legal regulation for Potassium Permanganate usage in the textile industry in Turkey.

Some background information from the World Health Organisation and ILO on Potassium Permanganate is also available here:  http://www.inchem.org/documents/icsc/icsc/eics0672.htm

This study was written by Clean Clothes Campaign Turkey. ‘Bleached Denim, Bleached Souls’ looks into initial evidence of the harmful impact of Potassium Permanganate on Turkish denim workers. There is also some history about jeans production in Turkey and some background on the industrial disease Silicosis caused by inhalation of sand and fibres in textile production.