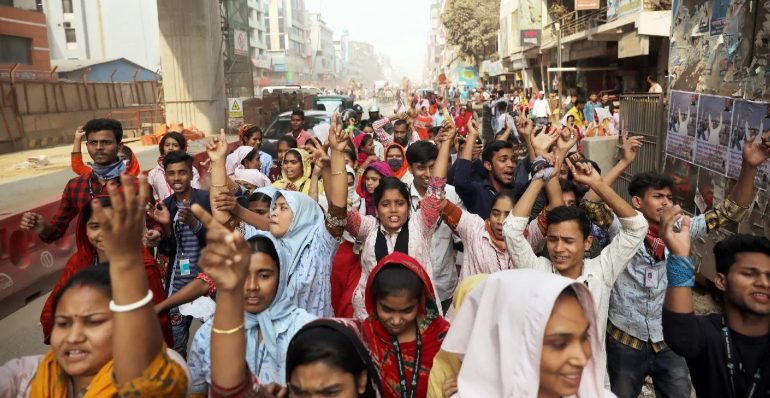 Thousands of workers in Bangladesh took to the streets in January to protest the recent inadequate wage revision in the garment sector. When police in Dhaka started firing rubber bullets and tear gas into the crowd, one worker was killed and many others were injured.

These protests and the ensuing repression do not stand alone. The protests are taking place against the background of the unresolved Ashulia crisis of 2016 and a generally dire situation for freedom of association in the country. In 2016, wage protests in Ashulia led to a week-long shutdown of dozens of factories, over 1,500 workers being sacked, about 30 workers and union leaders being arrested and roughly 50 union leaders going into hiding. Many union representatives still have outstanding charges against them, which leaves them at constant risk of arrest.

The Bangladeshi government ignored calls for a wage increase in 2016. During last year’s lengthy wage revision process the government failed to take into account the unified workers’ demand for 16,000 taka. The new minimum wage for the lowest skilled workers amounted to only half of that: 8,000 taka. For the majority of the workforce the new revisions hardly raised the base wage at all. At the same time, factories are taking measures against workers to mitigate the effect of the presumed wage increase.

Despite a climate of fear and intimidation beyond the already limited freedom of association in Bangladesh, especially during the 30 December national elections, workers and unionists have repeatedly voiced their discontent during the revision process and from the time of the minimum wage announcement.

During the wage revision process, Clean Clothes Campaign requested international brands and retailers to publicly support workers’ wage demands. A range of brands did express hope for a fair minimum wage revision in which workers’ voices would be heard, but the brands failed to support a specific amount. Since the announcement and implementation of a minimum wage significantly below any workers’ demands and any living wage assessments, these brands have failed to speak up.

Although the government of Bangladesh has repeatedly made international commitments to improve the situation for worker organizing in the country, recent amendments to the law do little to address national and international concerns. Freedom of association remains severely curtailed, which hampers expression of worker interests.

The demonstrations are furthermore taking place at a time when the eyes of the world and apparel industry are already focused on Bangladesh, after the controversial land-slide victory of the ruling party, and with the High Court about to decide on the future of the Bangladesh Accord on Fire and Building Safety’s operations in the country.

In February, Labour Behind the Label supporters and others took action outside the Bangladesh High Commission in London, calling for arrested workers to be released without charge from jail, and for the Bangladeshi government to end the repression of workers rights and cease the violence. More than 40 people attended and we delivered a joint letter from the TUC, UNISON, War on Want and Labour Behind the Label to the commissioner. We have since had a follow up meeting to discuss our demands.