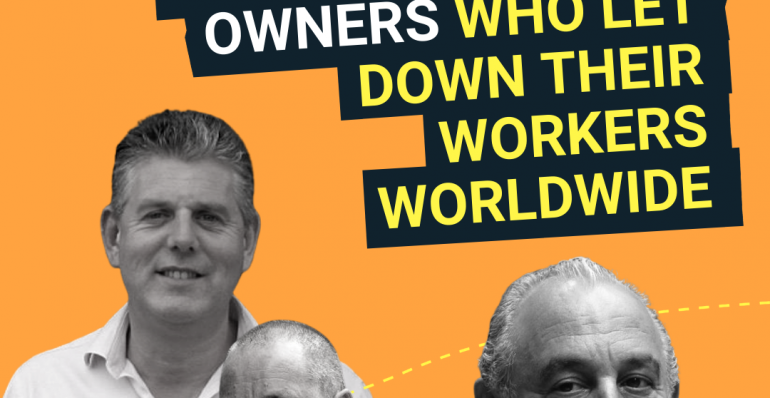 Following the collapse of Arcadia Group and the ongoing debate about who will buy up the pieces, Labour Behind the Label have issued the following joint statement with War on Want about the obscene wealth accrued and extracted from failing businesses by multi-millionaire garment brand owners, at the expense of workers in vulnerable supply chains who ultimately pay the price. There is a vital need for regulation from governments to protect these workers from globalization’s worst impacts.

The collapse of Arcadia is not just the fault of a rough economy but of a system that allows powerful brands at the top of supply chains to extract wealth with no accountability for the rights of the people who produce that wealth. Garment workers in Bangladesh, Cambodia, Vietnam, India and many other countries have long suffered from an industry that fails to pay its workers enough to survive. Meanwhile the owners of High Street brands sit on luxury yachts in the Mediterranean or reside in tax exile in Dubai.

In 2005 Sir Philip Green awarded himself one of the biggest paycheques in corporate history with a £1.2bn dividend[1] which was paid to his wife Lady Green, a resident in Monaco, tax-free – four times the annual profit made by Arcadia. Arcadia’s profits and the dividends it has paid have been made off the backs of thousands of predominantly women workers paid poverty wages. In March 2020 Arcadia cancelled orders resulting in misery for thousands of workers who were left without pay and depending on food parcels.

The system that has allowed Arcadia to do this is the same one that now leaves its UK workers with a £350m hole in their pension fund whilst the Green’s live in conspicuous wealth.

This week we learnt that Arcadia, has gone into administration – potentially with the loss of 13,000 jobs, an estimated £350 million pensions deficit and millions of pounds in unpaid and cancelled orders to workers in its global supply chain. This is on top of the news that Debenhams has gone into liquidation with the loss of 12,000 jobs.

Earlier in November, Edinburgh Woollen Mill (EWM) owned by Philip Day went into administration alongside the Ponden Home chain, putting 2800 jobs at risk. In March EWM ‘paused’ all orders and stopped delivery of goods already produced and by not paying its suppliers agreed prices it was workers who yet again paid the price in unpaid salaries and job losses. Peacocks and Jaeger – owned by Edinburgh Woollen Mill Group also entered administration in November, putting over 4500 jobs at risk. On the 2nd December Bonmarche, also owned by Day announced that it too is going into administration.

What these brands have in common is not that they have failed to keep up with the retail trends of today but that their multimillionaire owners have made the explicit choice to plunder their resources and treat their workers appallingly.

Only one year after Green sold BHS for £1, the retail giant entered administration in 2016, leading to the loss of 11,000 jobs and a £571 million pensions deficit. Indeed a 2016 government report[2] claimed that Green had subjected BHS to years of ‘systematic plunder’.    Bonmarche was bought in February this year by Philip Day, the millionaire owner of EWM, lives in Dubai and has an estimated net worth of £1.2 billion. [3] Another government investigation into Mike Ashley, the owner of the Frasers Group who was in the running to buy both Debenhams and possibly Arcadia revealed that his business model runs more like a ‘Victorian workhouse’ than a reputable high street brand.  [4]

Like many global clothing brands, the obscene wealth that Green, Day and Ashley have built over the past two decades, has only been possible due to supply chains that exploit and maintain global inequality.  Garment workers, predominantly in Asia and predominantly women of colour, have been found working  for up to 12 hours a day, 6 days a week- and  earn as little as £4 per day.[5]  By chasing the lowest wages around the world, global brands not only maintain poverty wages in many countries, but actively drive wages down in real terms and erode hard-won workers’ rights protections.

As these brands enter liquidation, the creditors – banks, hedge fund administrators and landlords will pick over the corpses of these businesses. The scraps left behind will leave retail workers in the UK with the bare minimum in compensation, and suppliers and their tens of thousands of workers across Asia will probably not see a penny– for cancelled orders, for underpaid wages and for loss of their jobs.  For them there is no safety net; hunger and homelessness are what years of work for the profits of billionaires has left them facing.

The time has come to recognise that voluntary codes of conduct have not worked for workers. Regulation and accountability are the only way to protect all workers’ rights and ensure living wages – for workers who make our clothes and those who sell them on our high-streets.

Immediately the UK Government should ensure that