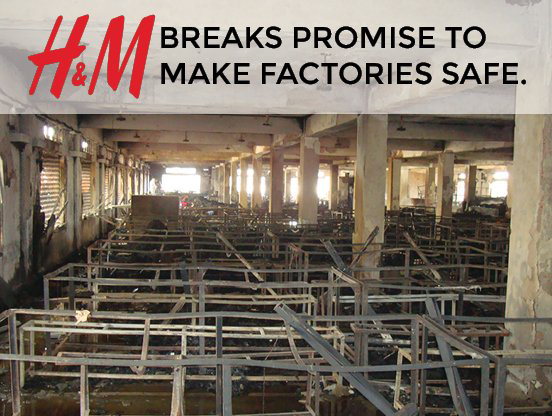 Labour rights groups in Europe, Bangladesh and North America are demanding that H&M finally keep its promises to make its Bangladeshi supplier factories safe. In the run up to H&M’s 2016 Annual General Meeting in Solna, Sweden on May 3rd, labour rights groups are increasing pressure on the fashion brand. A review of corrective action plans relating to 32 of H&M’s strategic suppliers, carried out this week, shows that the majority of these factories still lack adequate fire exits nearly three years after H&M committed to improve working conditions by signing the Bangladesh Accord on Fire and Building Safety.

The call to action comes as the Swedish fast fashion retailer increases attempts to promote its sustainability commitments in the face of growing criticism of worker rights abuses in its supply chains. The launch of H&M’s “Conscious Exclusive Collection,” taking place today at the Louvre in Paris, is one of several events H&M is holding to promote itself as a “sustainable” company. This will be followed by the launch of a video by pop star M.I.A. to promote H&M’s “World Recycle Week,” scheduled for the April 18-24, the same week that labour rights activists will commemorate the 1,134 workers killed by the Rana Plaza building collapse. That devastating garment industry disaster in 2013 originally led to the signing of the Bangladesh Accord.

Workers’ rights advocates have called on H&M to prove its commitments through action rather than stunts. They are specifically urging the company by ensure that three vital repairs – the removal of locks from fire exits, the removal of sliding doors and collapsible gates, and the installation of fire-rated doors and enclosure of stairwells – are completed by the time of the company’s Annual Meeting on May 3rd.

The importance of such repairs was once again underscored by a huge fire at a H&M supplier, Matrix Sweaters Ltd, in February. Only a handful of people suffered injuries, largely due to the fact that most workers had yet to arrive for their shift. The Accord’s inspection report for the factory revealed that it had missed dozens of deadlines to eliminate fire hazards and make the structure safe. Had the fire broken out just an hour later, scores of workers may have been trapped inside.

As a response to H&M’s inaction, the Clean Clothes Campaign, International Labor Rights Forum, and United Students Against Sweatshops have launched a campaign demanding H&M address its broken promises, with a campaign website, www.hmbrokenpromises.com.

1. Labour Behind the Label is the UK platform of the Clean Clothes Campaign. The Clean Clothes Campaign (CCC) works to improve conditions and support the empowerment of workers in the global garment industry. The CCC has national campaigns in 15 European countries with a network of 250 organisations worldwide.
Please see http://tracking.etapestry.com/t/31653218/1183091806/58958327/0/90567/ and http://tracking.etapestry.com/t/31653218/1183091806/59222928/0/90567/ for further information.
2. Labour Behind the Label will be organising a shop action alongisde War on Want in London outside H&M’s Oxford Street shop in the week running up to the Rana Plaza anniversary. For more info please contact Anna McMullen: anna@labourbehindthelabel.org.
3. There will be store actions taking place across Europe and North America on 3rd May outside H&M stores to coincide with H&M’s AGM. For more info on where an action is taking place please see: www.hmbrokenpromises.com.