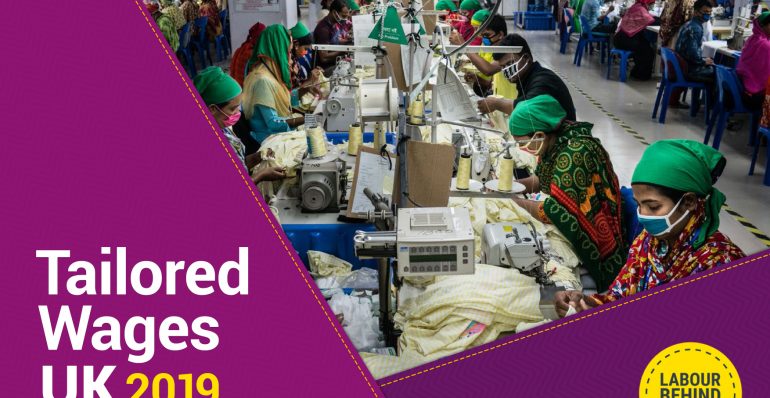 Our new report, Tailored Wages UK 2019, looks at 32 top brands to see who is taking action to address poverty pay for the people who make our clothes. It found that whilst brands said they had a commitment to ensuring wages were enough to support workers’ basic needs, no major clothing brand is able to show that any workers making their clothing in Asia, Africa, Central America or Eastern Europe are paid enough to escape the poverty trap.

Brands wield huge power and millions of dollars of business every year in the garment industry. They have the freedom to pick and choose from low-cost and low-wage economies and in these markets, brands can dictate prices, quantity and quality, with little consideration for the impact on supplier factories and their workers. The dominant business model pits country against country, and supplier against supplier in a global race to the bottom. In the face of the huge downward pressure on price and wage, almost all initiatives to tackle poverty wages have been unsuccessful. As such, countries compete to keep minimum wages low. There is a huge gap between minimum and living wages in most garment producing countries, often of 2 – 5 times. The consequences of wages not being enough to support a family are that workers live in shanty housing, with not enough to eat, take on debt, and often can’t afford to send children to school.

What brands are doing

We contacted 32 leading brands, covering luxury, sportswear, fast fashion, and online retail sectors, to find out if a living wage was being delivered. We found that, while some brands are doing more than others to promote better practices, no brand can yet show that living wages are being paid to any worker in supply chains outside their own headquarter countries. 84% of brands had made some sort of commitment to wages being enough to meet workers’ basic needs, but very few were following through on this commitment in any measurable way. Only 8 brands had benchmarks for example to measure if wages were enough, and had any way of checking if this level was covered in prices paid to suppliers.

Every brand in this study failed to give evidence showing that any workers in Asia, Africa, Central America or Eastern Europe are being paid a living wage. The only brand that scored higher than the lowest grade was Gucci, which was able to show that, for a small proportion of its production in Italy, national wage negotiations mean a family can live on a wage paid in some areas in the South and Central regions.

Voluntary initiatives are failing to deliver living wage
Most brands listed in this report have had a commitment to ensure that wages are enough to meet basic needs in their policies for over a decade or more. In all that time, voluntary initiatives haven’t come up with any solutions for closing the living wage gap in a reasonable time-frame. When we look to groundbreaking agreements like the Bangladesh Accord on Fire and Building Safety, we wonder what it would be like if brands signed legally binding, enforceable agreements to commit to delivering a living wage through purchasing practices and negotiation processes. This needs to be explored.

Transparency is a must
There is a clear need for greater transparency to ensure company commitments are backed up by fact. It is not sufficient for companies to make claims about key human rights issues such as living wages without supplying the quantifiable data that allows these claims to be independently checked and for workers and consumers to hold them to their commitments. Companies must publish not only supplier lists, but useful aggregated data that compares minimum wages, to lowest and average wages paid, to living wage benchmarks to make it clear how the industry is doing on this vital topic. Citizens want to know if progress is being made, and if time-bound milestones are being reached or missed, and how many workers are being paid a living wage as a result of brands’ efforts. This final key indicator is surely the touch stone of whether any of these initiatives are a success.

1. Clothing brands and companies must set public, concrete, measurable steps throughout their supply chain to ensure garment workers get paid a living wage within a reasonable timeframe, following the approach laid out in the Roadmap to a Living Wage.

2. Clothing brands and companies should negotiate and sign legally-binding, enforceable agreements with worker representatives that require the payment of significantly higher prices to suppliers, affording them the financial capacity to pay a living wage that covers the basic needs of a worker and her/his family.

If you would like to read the full responses from brands to the living wage survey that this study is based on, you can download the entire data set here.

Report:
Tailored Wages UK 2019: The state of pay in the global garment industry

The Tailored Wages report analyses responses from 32 top clothing brands about their progress in implementing a living wage for the workers who produce their clothes.