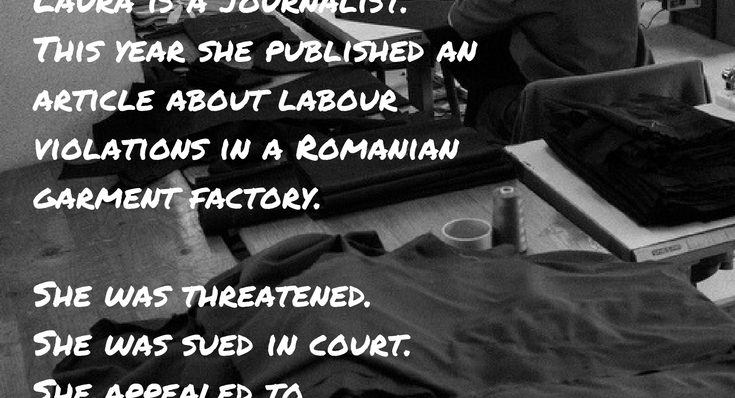 An international campaign convinced the Italian-owned factory Maglierie Cristian Impex in Romania to drop the trial against a Romanian investigative journalist for reporting on dire working conditions in one of the largest producers of garments in Romania. The factory employs around 900 people and produces for luxury brands such as Tommy Hilfiger, Marco Polo and LaCoste, but also for high street fashion brands such as Zara and Bershka.

‘Investigative journalists play a crucial role in exposing poor working conditions, given that employees are terrified to speak out and the topic is a taboo in the public,’ says Bettina Musiolek from Clean Clothes Campaign.

The journalist, Laura Ștefănuț, has been doing research on the garment industry in Bulgaria and Romania, exposing human and labour rights violations such as extremely low wages, long hours and arduous working conditions. She published her findings in an article released in February 2016. Since then, she has been put under enormous pressure and has been subjected to attempts of intimidation. This culminated in the lawsuit filed against her by Maglierie Cristian Impex, one of the factories cited in her article. Maglierie accused Laura Ștefănuț of scaring away its clients with her article, causing a loss of orders. The factory filed a damage case of 45,000 euros against her and the local newspaper which re-published her article.

Clean Clothes Campaign and US labour groups contacted brands sourcing from the factory and called on them to urge their supplier to withdraw the legal case against Ștefănuț, and work together with their supplier to ensure an end to any intimidation of workers and journalists. ‘Without international pressure from labour groups, the brands buying from this location would not have distanced themselves from this legal case going on in their supply chain in Europe,’ states Daniela Kistler. ‘We encourage brands to continue to be involved by taking concrete efforts to improve the working conditions in the region.’

‘Brands make consumers believe that “Made in Europe” is a synonym for working conditions that are better than in production countries in Asia’, says Bettina Musiolek. ‘Ștefănuț’s story shows that this is not the case, and that problematic working conditions and very low wages in particular, are occurring endemically across global supply chains worldwide. In Europe’s low-wage countries, the clothing industry is notorious for poor pay and bad conditions.’

Laura Ștefănuț remarks: ‘If the pressure on a journalist is already so intense, imagine what the workers face. I showed that employees can be fired for demanding their rights, but the entire pressure they face is difficult to grasp for an outsider. During the years of documenting vulnerable groups, I have never seen so many people terrified of speaking, as in the garment industry’. She recounted her own experiences with the intimidation, lawsuit and the following international campaign on her behalf in an article published in November 2016.