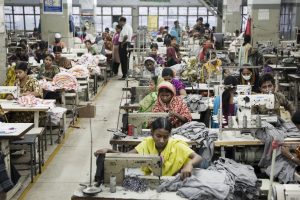 Unacceptable working conditions are often accompanied by long and unrealistic working hours.  Factory managers often force overtime, particularly when deadlines are imminent.  In many cases, overtime is demanded at the last minute and workers are given no choice; any protest on their part could lead to dismissal.  Long working hours without sufficient breaks can then lead to health problems.  Women in particular, have been reported to struggle with the demands of a stressful factory environment combined with pressures from home; many women working in the garment industry are solely responsible for their families.  Whilst garment workers are attempting to support themselves and their families, stressful conditions are making this task even tougher.

Long working hours and forced overtime are a major concern among garment workers.  Factory managers typically push employees to work between 10 and 12 hours, sometimes 16 to 18 hours a day. When order deadlines loom, working hours get longer.  A seven-day working week is becoming the norm during the peak season, particularly in China, despite limits placed by the law.[/vc_column_text]

We work from 8 am till noon, then have our lunch break. After lunch we work from 1 to 5 pm. We do overtime every day, from 5.30 pm. During the peak season, we work until 2 or 3 am. Although exhausted, we have no choice. We cannot refuse overtime: our basic wage is too low. If we want to rest, our employer forces us to keep working.

Phan, a 22-year-old machinist in a Thai garment factory

Overtime is usually compulsory. Workers are mostly informed at the last minute that they are expected to work extra hours.  In many instances, workers report being threatened with dismissal and subjected to penalties as well as verbal abuse if they cannot work the additional hours.  One report tells how a Bulgarian factory which supplies European brands imposes fines on those who do not work the overtime required; how Chinese workers were fined RMB 30 (US$ 3.60) for refusing to work overtime; and how workers from three other Chinese factories were prevented from resigning during peak production periods by having several weeks’ wages withheld by management.  Often, workers are not paid the overtime rate stipulated by law.

Long and irregular working hours make it difficult for women to meet the multiple demands made on their time.  The combined pressures of factory work and responsibilities at home often lead to stress-related illnesses, including depression, headaches, ulcers, high blood pressure and fatigue.  The push for more flexible working hours and the increase in informal working arrangements are further exacerbating the problem of excessively long working hours.