Zara, Next and Mango slammed for leaving workers without wages at Turkish factory 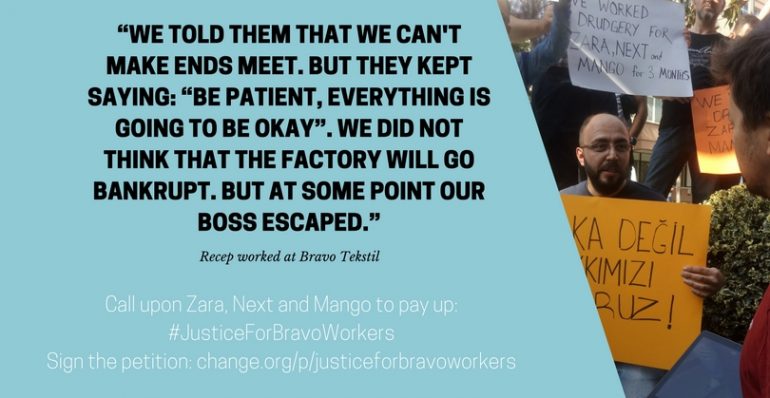 Zara, Next and Mango slammed for leaving workers without wages at Turkish factory

Workers at the Bravo Tekstil factory complex in Istanbul are demanding their unpaid wages and severance after working without payment for three months following the sudden shutdown of their factory.

The factory was producing for fashion giants Zara, Next, and Mango. UK campaigning organisation Labour Behind the Label, and the international Clean Clothes Campaign, support the workers’ demands that these brands take responsibility and pay up.

The workers have sought justice in the Turkish courts and have won their case. Legally they are owed the full three months’ wages and severance payments. Over one year since the closure of the factory in July 2016 there is no satisfactory solution in sight, so the workers, supported by their union, have launched a petition. They are calling on conscious consumers to support their campaign for compensation for their three months of unpaid labour.

“We demand what is rightfully ours. We only demand the compensation for our labour. Nothing else, nothing more,” says Yeliz Kutluer, a new mother and former Bravo Tekstil factory worker.

The workers had been employed making clothing products for Zara, Next, and Mango. Despite 75% of the factory’s overall production being for Zara, and Zara making record profits in the first quarter of 2017, Zara has refused to ensure that the workers who made their products are fully compensated for their labour. Next and Mango have also refused to take responsibility for all 140 Bravo Tekstil workers who are now left with nothing. The amount the workers are asking for is 2,739,281 Turkish Lira (about 650,000 Euros), which for Inditex – Zara’s parent company – constitutes around 0.01% of net sales for just the first quarter of 2017.

“Brands are principal employers. They have proven time and again that they control every aspect of their orders to their suppliers. Therefore, it is clear that it is in their power to make sure that all workers who produce their apparel receive their monthly wages and are working in safe conditions, and morally they must do so,” says Bego Demir of Clean Clothes Campaign Turkey.

After more than a year of negotiation Zara, Next, and Mango have not been able to offer a settlement to fully compensate all 140 workers. The brands’ offer would cover only about a quarter of the amount the workers are asking for. Azem Atmaca, a former Bravo machinery operator, stresses that it would be unacceptable to find a solution for less than the full group of 140 workers: “One worker would get his money and the other wouldn’t. We all have families and children.”

Sudden factory closures are not uncommon in the garment industry, in which competition is fierce and capital flexible. Within the garment supply chain, power is concentrated at the top, where major brands such as Zara, Next and Mango make high profits and have a lot of leverage over the factories vying for their orders. Past cases in Indonesia, Cambodia and Latin America, involving major brands such as adidas, Nike, H&M and Walmart, have shown that brands can and should take responsibility to ensure that abandoned workers in their supply chain are paid their legally owed back wages and severance.

“My father worked so hard. I know well how he worked non-stop, day and night. So I want him to have what he is rightfully owed… (Zara, Next, and Mango) should hear our voice. That’s all I want,” says the daughter of Hikmet, a former Bravo Tekstil worker. She has been unable to enroll in her second year at university because of the brands’ refusal to compensate her father for his work.

For all press queries email: press@labourbehindthelabel.org