Inside Missguided: a documentary that misses the mark 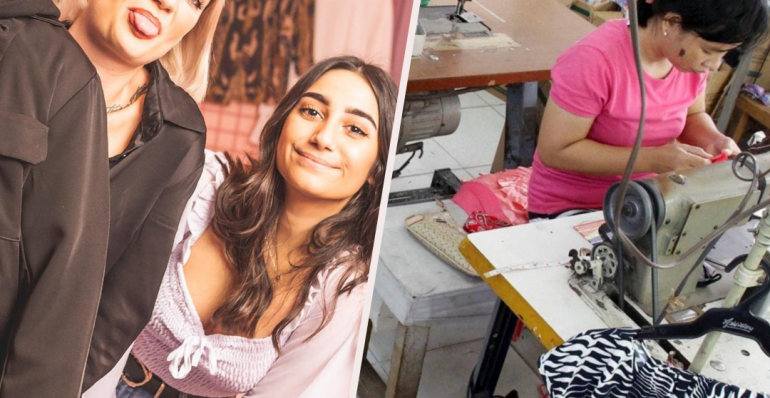 Channel 4 have been showing a 4-part documentary about the fast-fashion trend brand Missguided all this month [here]. We thought it might be worth while to add a record of our engagement with Missguided of late to bring some data to the debate.

For those of you who have missed the hype, the behind-the-scenes look at the inside workings of Missguided, in our opinion, fails to bring any critique about the huge environmental impact of throw away fashion and makes little or no comment about the risks imposed by brands who promote this ‘buy-fast-sell-cheap model’ on workers’ wages and rights in their factories.

The documentary glosses over moments when buying chiefs screw down suppliers on price and time (which ultimately leads to bad working conditions) and promotes some well-known ethical factories, without asking key questions of Missguided about their global supply chain, or about other more problematic Leicester factories.

Having said this, our recent engagement with Missguided has been positive. Here is a record of what has happened.

Our engagement on Transparency

Labour Behind the Label have been in contact with Missguided for the past year or so – urging them to make their supplier list public and be more transparent on where and how they source.

We previously challenged Missguided about the lack of transparency in their use of suppliers in Leicester and since last year’s environment audit committee investigation, the brand have reduced their supplier base and made efforts to separate themselves from other similar E-retailers in the north of England – mainly Boohoo. They joined the Ethical trading Initiative which is a small (sometimes irrelevant) step forward and have improved their auditing process. Recently they have published a full list of Tier 1 factories [here], and have also signed the transparency pledge [here].

Our engagement on Covid-19 actions and response

We contacted Missguided to ask about order cancellations and health and safety measures for workers in the pandemic. They state that they have provided extensive Covid-19 safety guidelines to all suppliers, in the UK and overseas.

Due to the way they source – often in small orders with very short lead-times – Missguided told us they did not cancel any orders in production or completed. At the start of the crisis they paused intake and then worked with suppliers to restyle future orders (where fabric had already been purchased) in order to produce more salable items (e.g. dresses into leisure wear). According to Missguided, supplier terms (payment days) were temporarily reduced in a few suppliers who were financially over-extended. Where the cost of transportation had become prohibitively high, Missguided also contributed towards the increase in freight costs.

Like Boohoo, Missguided have profited from the crisis and the surge in online sales, despite a dip at the start. Missguided claim they have not lost any suppliers to bankruptcy or order cancellations but instead have more. They say that all tier one UK suppliers have been checked and all deep cleaned. They are now checking tier two factories. In terms of the lockdown, Missguided claim that while the manufacturing sector was allowed to remain open, all their UK suppliers took the decision to close whilst they evaluated the situation and investigated how they could restructure their operations to be comply with social distancing. Missguided have also assured us that in the UK no suppliers dismissed any of their workforce and for those workers who have not been able to come into work due to shielding, either sick pay has been given or furlough was applied for.

So far the story from Missguided seems positive – but of course, we have no way of verifying this without conducting our own audits and meeting workers from all their factories and subcontractors (full supplier list including subcontractors is not yet available). There is of course a bigger question to be raised about the buying model of a brand that sells short term fashion for low prices, and how they can be sure that living wages and rights are available for workers who make their clothes (given that the vast majority of their suppliers are in China and South Asia where the norm is poverty wages and poor conditions). That’s a question for another time…