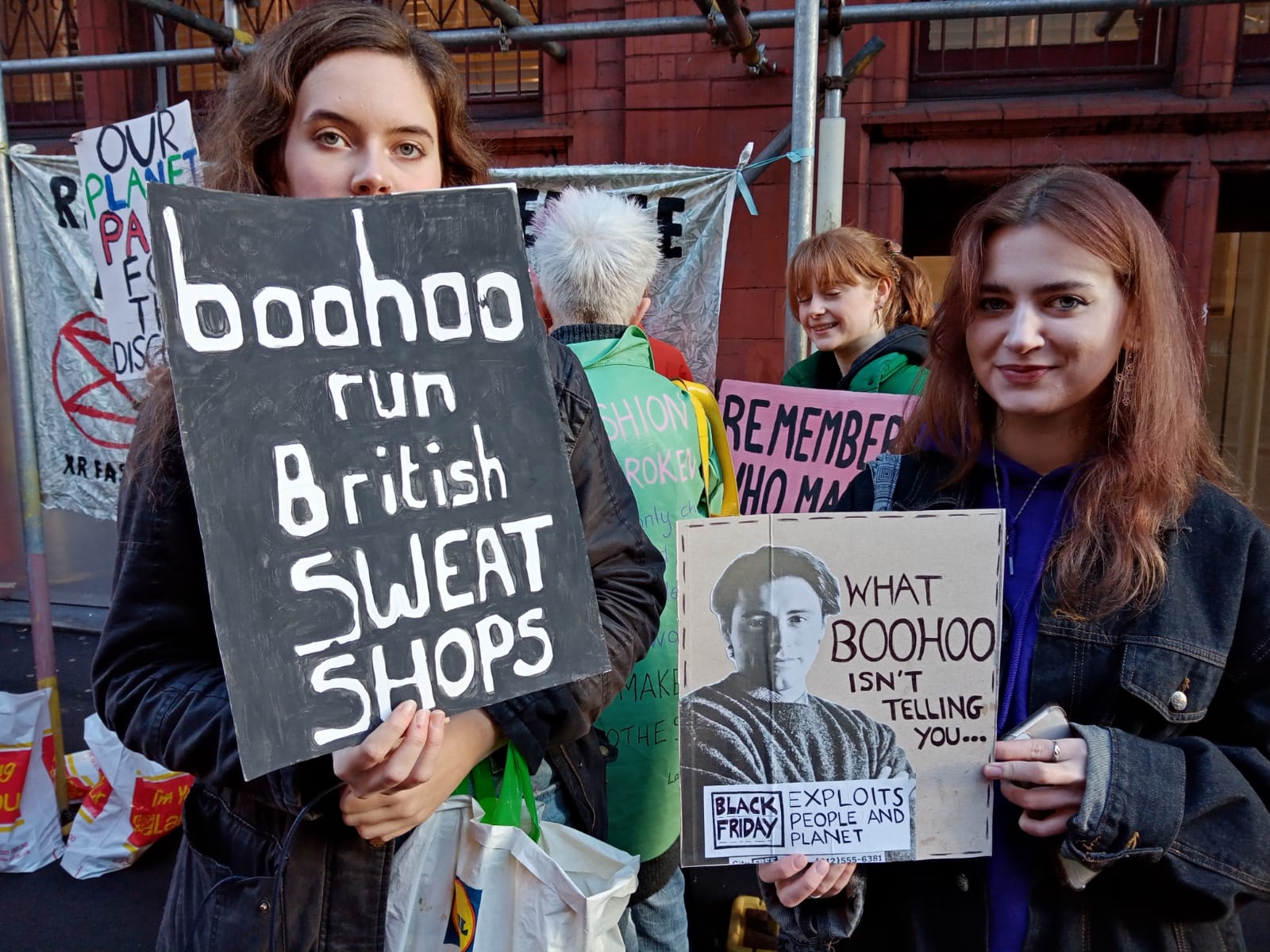 Unions, environmental activists and workers’ rights groups will protest outside fast fashion firm Boohoo’s HQ this Friday to demand the company stop harming the planet and abusing workers’ rights. Groups will oppose the extreme consumer discounts being promoted online this week and call on the firm and other e-retailers to move towards a Just Transition for the industry.

“Boohoo uploads an average of 116 new styles to its website every day [1], many under £5 at full price. Mass disposable fashion sales are inherently unsustainable, contributing to the estimated 92 million tonnes of textile waste [2] disposed of yearly. In spite of Boohoo’s vague references to ‘sustainable’ development, selling huge volumes of clothing at such low prices is impossible without labour rights violations and environmentally damaging production impacts. Boohoo must change its business model. A Just Transition for the fashion industry is essential to avoid social and ecological collapse.”

Anna Bryher, Labour Behind the Label campaigner said:
“Boohoo’s business empire is built on the exploitation of workers. The £4 an hour wages in Leicester that were linked to Boohoo’s labels time and time again, year on year [3], were the bedrock of its success. Boohoo’s latest round of woke-washing does not cover up the debt owed to workers in Leicester [4] and the deficit in legal wages which should be paid back to them.”

“While the business may be shifting production out of Leicester at present [5] and away from the media spotlight, minimum wages in Turkey and Pakistan, although legal, still represent extreme worker exploitation, as governments have failed to set liveable minimum wage thresholds for decades. Boohoo must make a radical shift in its business model to be in its own words ‘fit for the future’. Paying a living wage to its workers and ensuring unions are respected, is the absolute minimum.”

The retail trade union Usdaw will be speaking at the demonstration. The union represents workers at Boohoo’s warehouse and call centre in Burnley along with head office staff in Manchester. Boohoo has refused to recognise Usdaw repeatedly, despite direct requests by MPs and more, leaving Boohoo staff without a real voice at work.

Mike Aylward, Usdaw Regional Secretary said:
“Regrettably, Boohoo has played fast and loose with their responses to persistent calls for the company to become an ethical trader. They have not made any progress on working with Usdaw since the House of Commons Environmental Audit Committee recommended the company engages with us [6]. It feels like they were just saying whatever it took to get them through the MPs’ investigation.”

“We again ask Boohoo to take the simple step of sitting down with Usdaw to explore how we can work together. Boohoo could go a long way towards repairing their damaged reputation by meeting with Usdaw and engaging in a positive relationship. The company needs to clearly demonstrate to their employees, customers and the communities they operate in, that Boohoo is serious about being an ethical trader. We are joining with Labour Behind the Label to seek fairness and respect for fashion industry workers.”

The coalition is requesting that Boohoo meet to discuss meaningful action on workers’ rights and the climate, that they recognise the Usdaw union and that they pay workers in their supply chain a living wage.

High quality photos of the demonstration will be available on request by 3pm on Friday 25^th.

Notes
[1] https://www.vice.com/en/article/n7j43m/boohoocom-uploads-every-day-fast-fashion
[2] https://www.bbc.com/future/article/20200710-why-clothes-are-so-hard-to-recycle
[3] https://www.ft.com/content/e427327e-5892-11e8-b8b2-d6ceb45fa9d0
https://www.theguardian.com/society/2017/jan/23/textile-firms-paying-uk-workers-3-per-hour-investigation-finds
https://www.dailymail.co.uk/news/article-8511651/Sweatshop-owner-Boohoo-factory-confesses-pays-workers-shocking-4-hour.html
https://www.chargedretail.co.uk/2021/08/02/boohoo-garment-workers-still-being-paid-less-than-minimum-wage-according-to-new-report/
[4] This debt is estimated to be in the region of £125 million. In 2020, the British Retail Consortium calculated that workers in Leicester were being underpaid £2.1m a week. https://www.thebusinessdesk.com/eastmidlands/news/2041936-leicester-textile-workers-owed-over-27m-says-report.
This had grown from 2015 estimates, where Unversity of Leicester research put this underpayment at around £1m a week. https://amp.theguardian.com/sustainable-business/sustainable-fashion-blog/2015/feb/27/made-in-britain-uk-textile-workers-earning-3-per-hour
Boohoo was sourcing 50-80% of Leicester’s total output between 2015 and 2021. It is therefore a conservative estimate to assume that £50m in underpayment of wages per year, should result in Boohoo owing £125m in over a 5-year period, before the company made significant steps towards removing illegal pay from its supply chains.
[5] https://www.cityam.com/boohoo-cuts-ties-with-hundreds-of-suppliers-following-leicester-factory-scandal
[6] House of Commons Environmental Audit Committee Report into fashion industry sustainability: “We recommend that Boohoo engage with Usdaw as a priority and recognise unions for its workers.” https://publications.parliament.uk/pa/cm201719/cmselect/cmenvaud/1952/1952.pdf

Participating Organisations:
Usdaw (Union of Shop, Distributive and Allied Workers) is the UK’s fifth biggest trade union with over 400,000 members. Membership has increased by more than one-third over the last couple of decades. Most Usdaw members work in the retail sector, but the union also has many members in transport, distribution, food manufacturing, chemicals and other trades.

Labour Behind the Label is a UK campaign and policy group that works to improve conditions and empower workers in the global garment industry. It is a UK member of the Clean Clothes Campaign, a coalition of over 250 organizations worldwide working collectively to address human rights issues in fashion and call for change. See www.labourbehindthelabel.org and www.cleanclothes.org for further information.

Extinction Rebellion Fashion Action (XRFA) is a grassroots, non-violent direct action group, branching from the climate crisis mass movement Extinction Rebellion (XR). XRFA has sister groups across the world, and is made up of activists concerned about the damage the toxic fashion industry causes to people and planet. It takes direct and creative action against the fashion industry, and is proud to work in partnership with other organisations sharing similar goals this Black Friday. See www.xrfashionaction.com and @xrfashionaction on Instagram for more information.