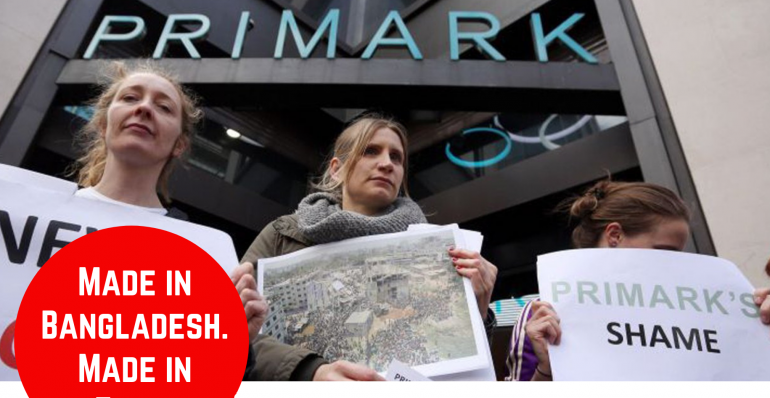 427 workers from Primark suppliers in Bangladesh lost their jobs after taking part in largely peaceful protests to dispute the sub-poverty minimum wage which is being paid in Bangladesh.  382 are now facing false charges bought by factory owners, and are unable to find other jobs due to systematic blacklisting[1]. Yet fast-fashion giant Primark has made no indication that it is willing to act to protect workers in Bangladesh.

Primark have just opened their world’s largest store in Birmingham.As the profits roll in on the back of Bangladeshi workers’ efforts, Primark have not publicly disputed the arrests and the dismissals, or shown any indication that they are demanding that suppliers reinstate workers and pay compensation. Furthermore, while Bangladesh faces a factory safety crisis as the Government of Bangladesh seeks to evict the Accord from the country, Primark once again are remaining silent [2].

Wednesday 24th April is the sixth anniversary of the Rana Plaza building collapse. Out of respect to the 1138 people who died in the disaster, Primark need to prioritise workers’ rights and the need for safe factories, and must act. Sign the petition to call on them to stop the repression at their suppliers and publicly support factory safety.

Made in Bangladesh. Made in fear.

This petition is now closed.