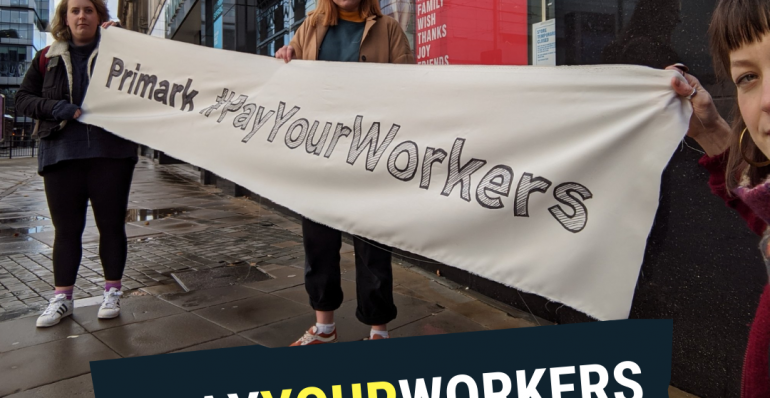 In November, we launched a campaign calling on Primark to commit to ensuring that all the workers in their supply chain were paid throughout the pandemic and beyond. Nearly 1300 of you joined the call and put pressure on Primark by signing our petition. Primark have since issued a response, published by the Business and Human Rights Resource Centre. Unfortunately, Primark have left fundamental questions about workers’ pay unanswered, and have still not committed to paying their workers throughout the pandemic and beyond.

In April, Primark announced that it had created a fund to help pay the wages of workers linked to orders that were due for shipment in the month after they were cancelled in 7 countries: Bangladesh, Cambodia, India, Myanmar, Pakistan, Sri Lanka and Vietnam. However, they did not share how they ensured that the money reached workers, what measures were taken in other countries in which Primark produces,  how the brand calculated how much it had to pay and if all workers have been paid in full.

In their response, Primark said: “We established a wages fund to make sure workers were paid as soon as possible for Primark product in production.  Over £23m was paid out, which in effect became an advance on the wage component of the £370m of orders that were finished and/or in production.”

Our take: It seems as though Primark’s ‘wage fund’ has in effect acted as an advance on payment for their orders as opposed to a fund to ensure that all workers in the Primark supply chain were paid their normal wages. Not only is referring to an advance supplier payment as a ‘wage fund’ misleading, but questions remain about how Primark is ensuring that workers in their supply chain are paid. We want to know:

Primark’s responded to allegations that we shared regarding three of their factories:

In Bangladesh, one of Primark’s suppliers (KAC Fashionwear Limited) which usually employs more than 6000 people, now only has 500 of them working now, while the rest of the workers are on ‘holiday’. Workers have stated that only workers who are currently working are being paid, while others are going without wages. The factory management has reported to have said that they are unable to pay salaries now due to lack of funds.

Primark’s response: “This factory is no longer an approved Primark supplier and the last order was handed over in September 2019.”

Our take: Despite Primark’s claim that KAC Fashionwear has not been a Primark supplier since 2019, this factory still appears on Primark’s 2020 supplier list. They appear to be a long-standing supplier and appear on supplier lists over several years.  We want to know whether the ending of orders was due to a lack of new orders or cancellations due to the crisis or for other reasons or for non-compliance?

In Cambodia, workers from another factory (New Best Global Textile Co Ltd) allegedly supplying Primark, staged a protest over wages and compensation owed after their employer fled. The workers are seeking eight days of owed wages, suspension benefits, severance pay and other compensation after the company closed.

Primark’s response: “This factory is no longer an approved Primark supplier and the last order was handed over in September 2019.”

Our take: New Best Global Textile Co Ltd appear to be a long-standing supplier and appear on supplier lists over several years.  We want to know whether the ending of orders was due to a lack of new orders or cancellations due to the crisis or for other reasons or for non-compliance?

In Myanmar, a Primark supplier (Shinsung Tongsang International Co., Ltd) closed its factory in May, resulting in 2000 out of 2108 workers losing their jobs and receiving only partial payment.

Primark’s response: “This factory closed in May 2020 due to the pandemic, all workers were subsequently paid severance pay in line with the local regulations and we worked with SMART Myanmar, a recognised EU funded NGO, to verify the relevant documentation.”

Our take: We are currently monitoring the situation in this case and verifying payments, we will provide updates when we have more information.

We have also asked Primark to respond to allegations concerning four other suppliers, which are included on Primark’s 2020 supplier list:

Primark have stated that they believe that ensuring workers are paid is of paramount importance, and Covid-19 did not alter their commitment to that principle. This would suggest that Primark commits to ensuring all supply chain workers will be paid in full.

As such we reissue our calls to Primark to sign up to the wage assurance statement and #PayYourWorkers!