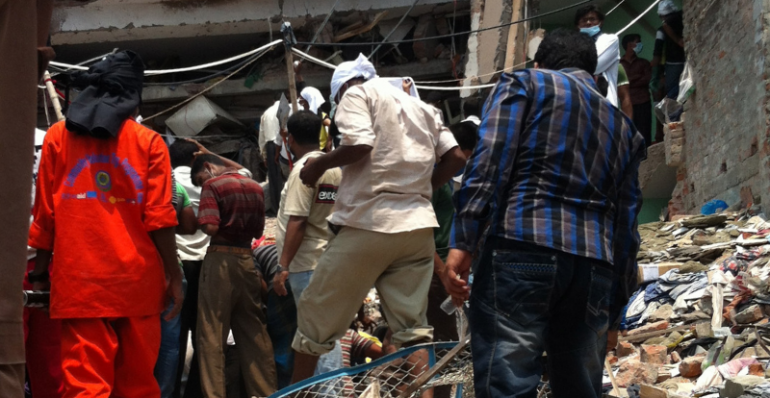 Seven years ago today, at least 1,134 workers died in the garment industry’s deadliest factory incident in history. Today, we remember the workers who died in the Rana Plaza collapse, sending our thoughts to those affected by this tragedy. While we commemorate this crisis, workers’ lives are again at risk. The COVID-19 pandemic crisis sweeping through the garment industry and across the world is undermining the ongoing worker struggles for social protection, living wages, freedom to organise, and safe factories in Bangladesh.

At this time of unprecedented crisis for the garment industry, with demand drying up, orders being cancelled and postponed, and millions of garment workers facing destitution, it is of paramount importance that hard fought labour protections are not rolled back. If supply chains will start functioning again after the pandemic, they must build upon the lessons learnt both after the Rana Plaza collapse and in the current crisis. These lessons must lead to a safer and fairer industry governed by binding and enforceable mechanism on wages, workers safety and health, freedom of association and social protection rather than to business as usual as before 2020 or even 2013.

Since May 2013, the Bangladesh Accord on Fire and Building Safety, established in direct response to the Rana Plaza disaster, has done a tremendous job in making factories safer for over 2 million workers. The Accord covers over 1600 factories which have remediated 91% of all safety defects found during the programme’s regular inspections. In May 2019, a protracted legal conflict about the right of the Accord to continue its presence in Bangladesh was eventually resolved with the understanding that within a year the Accord operations in Bangladesh would be replaced by a national RMG Sustainability Council (RSC), with participation of the Bangladesh Garment Manufacturer and Exporter Association (BGMEA), which represents factory owners.

Labour rights organizations in and outside Bangladesh, including CCC, have repeatedly expressed the Accord must first complete outstanding work for any new programme to take effect. The RSC can only be successful if it builds upon the Accord’s work. To do that it must follow key elements of the current programme: most notably its enforceability and transparency – to be enshrined in an international agreement signed by garment companies – and a commitment by garment companies to commercial terms that enable the financing of factory remediation.

With the onset of the global pandemic crisis, negotiations around such an agreement have ground to a standstill and the Accord has had to suspend operations. While the RSC’s starting date is approaching, safeguards to ensure its effectiveness in protecting workers remain conspicuously absent, including garment companies’ vital commitment to commercial terms allowing for remediation measures. It is of paramount importance that the process to come to an international legally binding agreement covering such commitment is resumed and finished and the Accord’s work is completed before the RSC starts operating. Without such an agreement, the RSC will hardly be distinguishable from the voluntary initiatives that failed to prevent the Rana Plaza collapse.

Over the past seven years, numerous industry stakeholders have furthermore worked diligently to end financial insecurity for workers injured on the job and for the families of those killed at work by   establishing an employment injury insurance system in Bangladesh. It is of utmost importance to ensure that the establishment of this much anticipated scheme is not further delayed. Seven years after Rana Plaza, workplace injury and death must no longer add destitution on top of grief for affected families.

The current crisis should serve as a further incentive to create strong social protection floors, consistent with ILO standards on sickness benefits, unemployment, and health insurance. Such systems need a leading role by the government of Bangladesh, but can only be established with cost-sharing built into future garment supply chains.

Cancelled orders, and closed factories threaten the future of the industry

The absence of robust social security systems and the power imbalance in today’s supply chains have been painfully exposed by the COVID-19 pandemic. After an initial slowing down of production due to lack of raw materials from China, the industry has further suffered from Western buyers cancelling their orders and refusing to place new ones. Research by the Penn State Center for Global Workers’ Rights indicated that by the end of March almost 50% of factories had a majority to most of their nearly completed orders cancelled by buyers.

In the wake of public outcry, some buyers have since reversed their decision and have agreed to pay for their orders already in production. However, a significant number of major buyers from Bangladesh, notably Arcadia, Gap, Walmart, Tesco and more, continue to stand firm in their decision, and refuse to pay and receive their completed orders. This behaviour, which in many cases violates their own contracts, ensures that eventually workers pay the price.

After the government announcement on 25 March of a country wide lock down until 4 April, many garment factories closed and thousands of workers returned to their villages to spend the duration of the lock down period with their families. However, because factory owners were not obliged to close their factories, a significant number of factories still continued to operate. At the end of the mandated lock down period, thousands of workers returned to their factories get back to work and to collect their March wages. Workers spent large portions of their journeys back to the cities on foot or by unconventional means because public transport was still under lock down measures. Upon their arrival back at work, many workers were only then notified of an extended leave period or of the termination of their employment and mostly left without their due March wages.

“Workers returned to their workstation, risking their safety and spending expensive transport fees,” said Kalpona Akter, President of the Bangladesh Garments and Industrial Workers Federation:  “This irrational decision of factory owners put not only the lives of workers at risk but of all Bangladeshis. Only when the issue of workers returning to work under great risk was nationally criticized, did employers organisations BGMEA and BKMEA issue general leave for their member factories.”

Some factories have since decided to reopen despite the government-declared extended lock down, forcing workers back to work under threat of dismissal or loss of already earned wages. The BGMEA has furthermore announced the intention to open all factories again after 25 April. Workers’ health and safety should not be put at risk by prematurely opening the factories. It is vital that factory owners start taking full responsibility for their workers’ health and well-being by ensuring workers receive their full wages during the crisis, through the digital systems provided by government, ending the retrenchment of workers and reinstating workers dismissed at the onset of the crisis and, once safe return to work is enabled, providing sufficient protection and paid sick leave.

The government should ensure that systems to safeguard the livelihood of workers, including those dismissed and furloughed are put in place and that disbursements are organized in a transparent manner with independent oversight, with factory owners and buyers taking responsibility for worker payments.

Brands and retailers have thus far refrained from taking responsibility for these workers’ livelihoods or for mitigating the reckless behaviour of these factory owners. Instead, brands and retailers’ refusal to pay for orders and the attempts to negotiate discounts has placed many factories in precarious financial positions, without the financial means to pay their workers their wages for March and months to come. Garment companies must, together with factory owners, take responsibility to pay for their orders and set up financial systems to ensure full worker payment for the length of the crisis, or else workers will be left in destitution and without job security.

This crisis tragically shows that the past seven years have done little to upend the power dynamics between workers and factory owners. The workers of the Rana Plaza factories knowingly were forced to enter the unsafe building, because their managers threatened they would withhold a full month of wages. Now millions of workers again have to chose between their health and safety on the one hand and livelihood on the other. Again, workers will be forced to enter factories in full knowledge that they might be risking their lives. Global supply chain systems have for too long enabled the shifting of blame for any ill befalling garment workers between factory owners, garment companies and governments, as they did after the Rana Plaza collapse. It is now time for the major stakeholders in this industry to develop systems that allow them to jointly further workers’ rights rather than passing the buck around.

The dire situation of insecurity, unpaid wages and layoffs led workers to take to the streets. From 12th April, hundreds of workers started sit ins and demonstrations to demand their wages and an end to layoffs. Protests continued as hundreds of factories ignored a government directive that factory owners who did not pay their workers before 16 April would be punished, offering loans to factories unable to pay for the wages.

The sight of protesting workers, remains all too common in Bangladesh. Despite the widely felt need to address the systemic labour violations embedded in the garment industry after the Rana Plaza collapse, the exorbitant profits of brands and retailers continue to be reliant on suppressing the wages of garment workers, and therefore brands, retailers, and factory owners routinely thwart any attempt by workers to organise and fight back against this unjust system. As recently as January 2019, a crackdown of historic proportions ensued against garments workers in Bangladesh in response to peaceful strikes protesting the sub-poverty wages. Factories fired over 10,000 workers, blacklisting many, and pressing trumped up criminal charges against thousands. Today, at least 20 cases still loom over hundreds of workers, tempting their fates with the threat of prison. These cases are in addition to three cases still pending against union leaders in retaliation for their role in organising protests in 2016.

Once government buildings reopen, the workers connected to these cases will once again be forced to travel regularly to court to meet bail requirements, compounding the risks already faced during this pandemic. The constant threat of jail time adds even further insecurity to workers during this crisis. Therefore, it is essential that among the first order of business for the courts is to immediately dismiss all these unjust cases. Brands, factory owners and the authorities must act to ensure all these trumped up charges are dropped and freedom of association of workers is protected.

Amin Amirul Haque, president of the National Garment Workers Federation, concluded: “The inequalities of global supply chains that are now magnified by the COVID-19 crisis have always been there. It is unfathomable that the industry should return to business as usual upon recovery. It is high time that brands and retailers start to fundamentally reform their supply chains and prioritise workers’ rights, building in means to allow for social security and living wages through enforceable and transparent systems.”