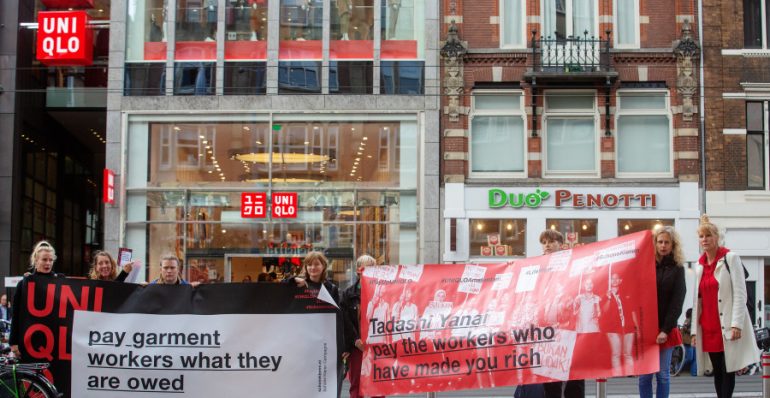 Workers at Jaba Garmindo factory, which is based in Jakarta Indonesia, lost their jobs overnight due to the unexpected factory closure, as a result of bankruptcy. 80% of these workers were women. They are still waiting for 5.5 million USD that they are owed in severance pay. This week, Uniqlo opens their first store in Milan, the fashion capitol of Italy. Tell Uniqlo we don’t need more stores, we need justice for the people making their clothes!

What happened
In 2015, the Jaba Garmindo factory became bankrupt when UNIQLO and other major buyers withdrew all orders from the factory. As a result of this, workers were left without the payments they were owed. UNIQLO is in denial about accepting its share of the blame and has refused to pay the workers their due. UNIQLO’s billion-dollar fortune was built upon the sweat of these workers and they need to take responsibility for their actions.

The workers are owed a total amount of 5.5 million USD as per the Indonesian law. This money was earned by the workers over the years of long hours of hard work producing clothes for UNIQLO and other brands. The urgency of the situation is all the greater as unemployed workers continue to be in a vulnerable state since majority of them are women and some are considered ‘too old’ to be re-employed by any other factory.

“It’s plainly unjust that workers who made Uniqlo clothes suffer needlessly, while the Uniqlo brand continues to grow and thrive, generating billions in profits. The money we are owed, we earned over years of working hard to make Uniqlo clothes, and to refuse to pay us is tantamount to wage theft,” says Teddy Senadi Putra, of Labour Union PUK SPAI FSPMI formerly at PT Jaba Garmindo.

Since 2015, workers, unions, feminists and labour groups have all come together under one umbrella to protest against UNIQLO’s wage theft. The #PayUpUniqlo campaign was introduced to make sure that the unemployed workers are compensated for their years of hard work and dedication.

What you can do
This week, Uniqlo opens their first store in Milan, the fashion capital of Italy. Will you get involved and tell Uniqlo we don’t need more stores; we need justice for the people making their clothes?

Go to Uniqlo’s online channels and drop your messages there to show your support:

Sample message: Ciao Uniqlo! Your billion-dollar fortune was built upon the sweat of the workers, whom now you are refusing to pay! Pay the workers what they owe.

UNIQLO are opening a new store in Milan on 13th September. Join with other activists in being a social media warrior, and spam their facebook page with messages about UNIQLO’s debt to Jaba Garmindo workers.

Go to the page here

Post a message like:
Two thousand workers who used to stitch your clothes lost their jobs when their factory suddenly closed down in early 2015. Four years later workers and their families are still waiting for over USD 5.5 million owed in severance payments. What are you playing at UNIQLO? Pay workers what they are owed!