Tell M&S, Next, Matalan and Primark to protect progress on factory safety

This action is now closed.  Thank you to everyone who tweeted M&S, Next, Matalan and Primark, telling them to protect progress.  On the 25th August 2021, apparel brands and workers unions  announced the new International Accord for Health and Safety in the  Textile and Garment Industry.  We can now confirm that over 500 tweets were sent as part of this action, and all four brands targeted have now committed to the new agreement.

Your pressure helped to receive this outcome- thank you for your solidarity! 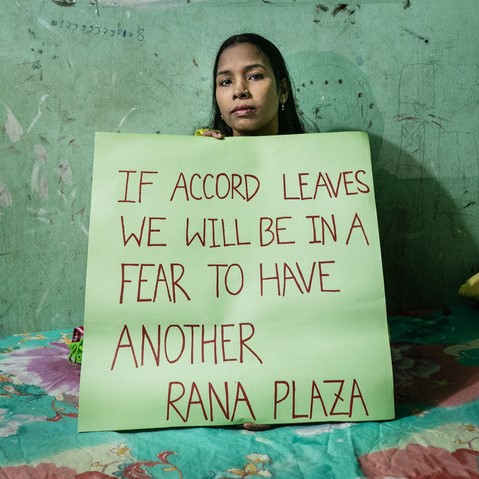 The Bangladesh Accord has made over 1600 factories safer for two million workers. But this progress is in risk. We need your help to tell brands to commit to factory safety.

The Rana Plaza factory collapse in 2013, is the worst industrial disaster the garment industry has ever seen. Workers were forced to enter a factory that they knew was unsafe, as managers threatened to withhold their wages. At least 1,134 people died and thousands more were injured.

The tragedy of Rana Plaza was entirely preventable, and brands have the power to ensure that tragedies like this are prevented in the future.

After the collapse, the Accord on Fire and Building Safety in Bangladesh was created. Over 200 brands signed a contract to commit to improving workplace safety in Bangladesh. Under this contract brands could be sued in court by unions if they break their promises. This programme has made over 1600 factories safer for two million workers.

Eight years on, brands no longer want to be held legally accountable for keeping their workers safe. The Clean Clothes Campaign has released a new tracker showing which brands are willing to sign a new binding agreement ensuring workers can feel safe in their factories, and which brands have the power to make a difference but have failed to do so

We don’t believe that brands will keep their promises if they can’t be brought to court individually, as their audits and empty promises failed to prevent Rana Plaza before. Let’s send them a message now to tell that a safety programme is only meaningful if it is binding.

Got a minute? Tweet the brands by clicking on this button below!

Got another minute? Tweet all the brands individually by clicking on the buttons below!