It’s time for a ‘Business, Human Rights and Environment Act’

The UK was once a pioneer on business and human rights. But now, the UK is clearly falling behind other countries in its duty to protect our human rights and environment from corporate abuse, following the European Council tabling its directive for new EU mandatory human rights and due diligence laws last week.

The clear next step for the Government, following a year where it has chaired the G7 and COP26, is to show global leadership by introducing a new law to require companies to conduct human rights and environmental due diligence in order to prevent and mitigate the risks that their actions pose. This law must also include legal liability for harm – modelled on the UK Bribery Act’s ‘failure to prevent approach’ as already recommended by Parliament’s Joint Committee on Human Rights – to ensure access to remedy for victims of abuses.

So why should the UK do this now?

Companies want the UK must stay in step with other jurisdictions

European states and the EU bloc itself are now introducing new laws placing due diligence obligations and liability on companies operating in their jurisdictions. In many instances, these laws will apply to UK companies doing business in these states. This will have major consequences for these businesses, compounding an already distinct lack of clarity on their legal obligations on human rights abuses and environmental destruction. If good practice in the UK remains to be only encouraged by voluntary guidelines or limited and toothless reporting obligations, companies doing the right thing will face a clear competitive disadvantage.

As a statement endorsed by 36 businesses and investors, including the British Retail Consortium, John Lewis, Tesco, Asos, and Primark outlines: “We call on the government to introduce a new legal requirement for companies and investors to carry out human rights and environmental due diligence…. Legislation can contribute to a competitive level playing field, increase legal certainty about the standards expected from companies, ensure consequences when responsibilities are not met, promote engagement and impactful actions between supply chain partners and, above all, incentivise impactful and effective action on the ground.”

We need it not just to regulate global supply chains, but for our own UK human rights

Due to the global nature of UK business value chains, a new UK law would have a global impact on the improved realisation of human rights in all territories where UK businesses operate. But it would also have clear effect in the UK. As an expert legal opinion into the potential liability of Boohoo for alleged supply chain abuses in Leicester found, Boohoo’s story is, “… a compelling example of a situation in which such legislation might have made a difference”.

In the absence of new laws we face a profound ‘governance gap’ in how we regulate business on human rights and the environment and the result of this governance gap is that it creates potential and actual corporate impunity for the ongoing abuses of human rights and unjust environmental destruction suffered by people and communities in the UK and around the world.

Most importantly, a new law can help protect the rights of people and communities around the world from potential or actual corporate abuse.

It is not enough to only ‘encourage’ business to undertake human rights and environmental due diligence: soft law approaches are not sufficiently effective to change how businesses operate with respect to human rights. While the UK has made progress in recent years, it must now step forward with the binding laws we urgently need to change the situation faced by people, workers and communities around the world suffering abuses of their rights and environment.

The time to act is now.

This blog is an excerpt from a statement signed by Labour Behind the Label and other organisations in the Corporate Justice Coalition on 23rd February 2022. See the full statement here. 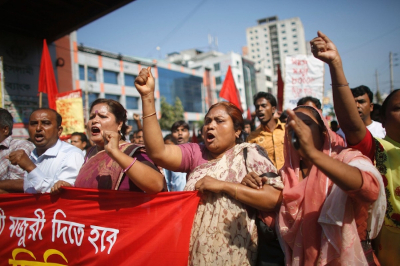 What are we calling for?

LBL is part of a coalition of civil society organisations calling for the introduction a new UK ‘mandatory human rights and environmental due diligence’ law, based on the duties to prevent tax evasion and bribery found in the Criminal Finances Act 2017 and the Bribery Act 2010.

The principles for a new law have been prepared by UK civil society organisations who are working to strengthen corporate accountability for human rights abuses and environmental damage. These principles provide an overview of the elements needed in  new legislation.

They are endorsed by the Corporate Justice Coalition and 34 individual UK partner organisations.

VIEW MORE BLOG ENTRIES
We use cookies on our website. By clicking Accept you consent to the use of cookies.ACCEPT
Manage consent