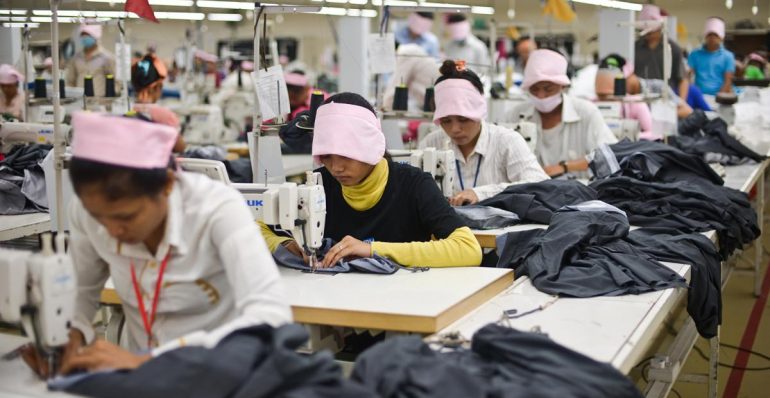 9.10.19 – Labour Behind the Label have today criticised the UK Government for unconditionally promising that Cambodia will retain trade privileges with the UK after Brexit.

A joint letter [1] with the Trades Union Congress, to the foreign office, made clear that the UK’s commitment to a trade deal with Cambodia undermines international efforts to address the dire state of human rights in the country.

The UK’s deal has been promised in the middle of EU and US talks with the Cambodian government about the country’s deteriorating human rights situation, where parties are debating the withdrawal of trade privileges in efforts encourage positive action. The UK government statement [2], made by Heather Wheeler, Minister of the Foreign and Commonwealth Office for Asia and the Pacific on 17th September, promises continued preferential trade with the UK and makes no reference to any conditions for trade privileges relating to securing a minimum of human rights protections.

Dominique Muller, Policy Director at Labour Behind the Label, said: “Ill-though out statements made by UK government officials on a potential post-Brexit trade deal with Cambodia are harmful to attempts to address declining human rights in the country. As the second biggest importer of Cambodian goods in the EU, the UK has a responsibility to push for stricter human rights standards. We call on the UK government to ensure that human rights protections are an integral part in any future international trade deal.”

The repression of human rights in Cambodia has intensified over recent years as Prime Minister Hun Sen and his Cambodia People’s Party have targeted activists, NGOs and independent media outlets. This includes an increasingly oppressive security presence, the arrest of journalists, arrests of opposition members and trade unionists, and restrictive legal amendments.

The letter makes clear that the UK’s position disincentivises Cambodia from adhering to a standard of human rights protection and is contrary to the principles and promise of the UK government to commit to greater parliamentary scrutiny of trade deals [3].

[4] Labour Behind the Label is the UK platform of the Clean Clothes Campaign, which works to improve conditions and support the empowerment of workers in the global garment industry. The CCC has national campaigns in 15 European countries with a network of 250 organisations worldwide. Please see www.labourbehindthelabel.org and www.cleanclothes.org for further information.

Letter to the UK Gov

This letter was sent jointly from Labour Behind the Label and the Trades Union Congress on 8th October, 2019, to Rt Hon Dominic Raab, Foreign Secretary, at the Foreign & Commonwealth Office.