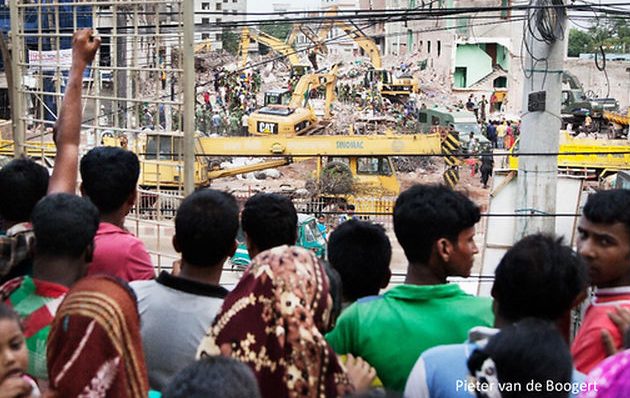 On 24 April 2017, Labour Behind the Label and the Clean Clothes Campaign network will be remembering those killed and injured at Rana Plaza, the multi-story building which collapsed in Bangladesh four years ago. In a statement released today Clean Clothes Campaign sends its thoughts and sympathies to those still grieving for their loved ones, and those still suffering from the physical and psychological scars left by the disaster.

Clean Clothes Campaign is also marking the fourth anniversary of Rana Plaza by outlining a set of key actions needed from governments, brands and employers on building safety, workers rights and transparency. These actions are needed to deliver the fundamental change promised in the aftermath of the disaster.

In its statement, available online, Clean Clothes Campaign addresses a range of recurring issues haunting the garment industry that were particularly highlighted by the Rana Plaza disaster. When the building, which housed five separate garment factories, collapsed, it had not been properly inspected, its workers were not in a trade union, and there was no public record of which brands had been buying from those factories.

The legally binding Bangladesh Accord on Building and Fire Safety was set up in the aftermath of the disaster to ensure that proper inspections were carried out and that their findings were acted upon. This has led to a significant improvement in the safety of factories in Bangladesh. However, progress towards a safer garment industry is being hampered by the failure to address the continued repression of workers’ rights and the unjustified secrecy around where clothing brands produce their goods.

This secrecy also hampered the campaign for compensation which followed the Rana Plaza collapse. Union activists and journalists had to search through the rubble for labels and documents needed to prove the link between brands and factories. As Ben Vanpeperstraete of Clean Clothes Campaign pointed out: “Workers should not have to risk their lives or their jobs trying to smuggle labels and documents out of a building to get their voices heard. Workers have a right to know who it is they work for, and consumers should know where the clothes they buy are made.”

Clean Clothes Campaign, in its statement, developed a series of clear, simple and achievable actions which, if taken by the brands and governments, would bring us much closer to the sustainable garment industry workers and consumers have been promised. These actions include an extension of the current Bangladesh Accord beyond its initial five-year validity and the Accord’s strengthening. Clean Clothes Campaign also calls on brands and retailers to improve transparency of their supply chain, allowing workers and consumers to more closely monitor working conditions. In addition, the statement highlights the need for greater action from the European Union – Bangladesh’s largest export market – to use trade regulation to enforce union rights in Bangladesh and to pass regulation requiring brands and retailers to disclose their supply chain.

As we mark the fourth anniversary of the deadliest disaster in the garment industry, we call on governments and brands to take action now to finally deliver on their promises to work towards change.

Building on efforts to improve transparency in the garment and footwear industry, Labour Behind the Label and the Change Your Shoes project will launch a campaign next month calling on shoe brands to publish supplier information and protect human rights in their supply chain.