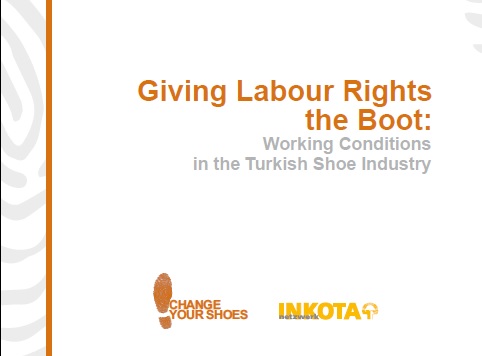 This study from INKOTA (Germany) reveals the extent of widespread labour law violations being committed within the Turkish footwear and leather industry. EU member states, most notably Germany, are the main consumers of footwear produced in Turkey. Together with Labour Behind the Label and other partners in the Change Your Shoes coalition, INKOTA is calling upon European footwear companies to ensure that human rights are upheld in countries producing their products, such as Turkey, and to publicly report on workers’ rights.

The study investigates the situation facing workers at Turkey’s shoe and leather production sites. As part of the Change Your Shoes campaign, a number of interviews were conducted with individuals employed at Turkish tanneries, leather-processing plants and footwear manufacturers. Their testimonies paint a picture of a footwear and leather industry where structurally caused labour law violations are commonplace. Workers reported earnings that fell short of a living wage, inadequate protection against occupational health and safety risks and an alarming rise in informal employment. There were also reports of excessively long workdays and discrimination against trade unionists.