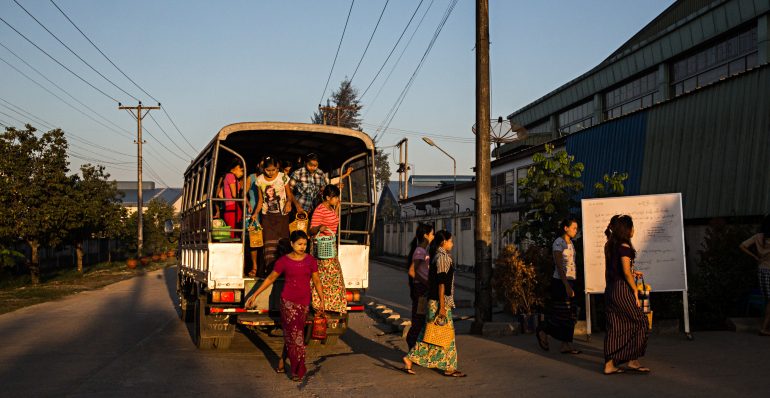 Please find below a press release and report, published today by the Centre for Research on Multinational Corporations (SOMO), investigating conditions in the Myanmar garment industry.

Nicola Round, Campaigns Manager at the UK-based organisation Labour Behind the Label, said: “None of us want to find that our clothes have been made by children, but sadly that is what is happening in factories supplying our high street brands.

“UK fashion brands are among the European companies rushing to invest in Myanmar, made more attractive now with the lifting of sanctions and the availability of cheap labour. This report raises an important question: what impact does our demand for cheap fashion have on the 350,000 garment workers in Myanmar, a fragile democracy where labour laws are weak, wages are desperately low, child labour is widespread and garment workers – 90% of them women – are vulnerable to exploitation?

“UK brands sourcing from Myanmar, or looking to do so, must take urgent action to identify risks and prevent human rights violations in their supply chains. We call on companies to disclose details of their supplier factories and measures taken to address such risks. As this important report also recommends, companies sourcing from Myanmar must pro-actively support workers in their rights to organise and join unions. The UK fashion industry has a responsibility to ensure that through their investments in Myanmar, its people are not exploited but are given fair, decent employment and respect for their human rights.

“We want UK brands to pay their workers a living wage, and to stop employing children.”

Amsterdam, 5 February 2017 – After years of sanctions, trade with Myanmar (formerly Burma) has started to flow. Low wages and favourable trade conditions are luring garment production from the region to this fragile democracy. Big and lesser known European brands are tempted to join in with this ‘race to the bottom’, unhindered by poor working conditions. In a new report, “The Myanmar Dilemma”, the Centre for Research on Multinational Corporations (SOMO) documents in detail how garments made in Myanmar for brands including H&M, C&A and Primark are produced for very low wages. Researchers found that long working hours and child labour are no exception in this industry. In the development of industrial zones, land rights have also been violated.

Martje Theuws, researcher at SOMO, said: “Garment brands should think twice before they start production in Myanmar. The risk of labour rights violations is very high. Companies should make a thorough analysis of all potential problems. They must ensure that they, together with their suppliers, identify and tackle these risks before placing any orders. Our research shows that companies are not doing this adequately.”

Garment industry on the move
Myanmar is so attractive to the garment industry because it is cheap due to low wages and favourable trading conditions. Under pressure from the garment brands, Chinese and Korean factory owners are among those who have moved their production to Myanmar. This ‘race to the bottom’ causes unhealthy competition between garment producing countries in the region.

Twelve factories, 400 workers
Together with the local NGOs Action Labor Rights (ALR) and Labour Rights Defenders and Promoters (LRDP), SOMO investigated 12 export-oriented factories where 400 workers were interviewed. Eight of these factories are foreign-owned. SOMO also spoke with clothing brands, improvement initiatives, factory owners, employers’ organisations and with local and international trade unions and NGOs. The research findings were presented to the companies mentioned in the report before publication. Many of these companies did not bother to respond. Companies that did react revealed a mixed picture: they recognise many of the problems, but at the same time the companies lack a convincing approach to solving these issues, which deeply concerns SOMO.

Poor working conditions
Garment workers hail from the impoverished countryside, moving to the city to find work. They often end up in slums, sometimes even without electricity or running water. That is all they can afford, since the legal minimum wage is a pitiful € 2.48 per day. To earn money, they work for long hours, sometimes for up to 11 hours a day. In peak periods, workers sometimes have to do forced and unpaid overtime. It often happens that salaries are withheld when workers cannot work due to illness.  Girls younger than 15 years old find employment in this sector. And to make matters worse, workers have very few opportunities to file complaints and get redress. There are very few independent unions. These are serious violations of international labour standards.

Ongoing conflicts
The political and socio-economic situation in Myanmar is still very unstable. In parts of the country there are armed struggles between the army and ethnic groups. Villages and communities have been evicted from their land to make way for industrial parks and Special Economic Zones without consultation or adequate compensation.

Martje Theuws: “The rule of law in Myanmar is not adequately upheld. The army still has a lot of influence. Civil society organisations and trade unions have only been allowed to operate since 2012. The garment industry’s operations go largely unchecked. The question is justified if the time is ripe for foreign companies to invest in Myanmar.”

Download Report ‘The Myanmar dilemma: Can the garment industry deliver decent jobs for workers in Myanmar?’

About SOMO
The Centre for Research on Multinational Corporations (SOMO) is a critical, independent, not-for-profit knowledge centre on multinationals. Since 1973 we have investigated multinational corporations and the impact of their activities on people and the environment. We provide custom-made services (research, consulting and training) to non-profit organisations and the public sector. We strengthen collaboration between civil society organisations through our worldwide network. In these three ways, we contribute to social, environmental and economic sustainability. www.somo.nl

About Action Labor Rights (Myanmar)
Action Labor Rights (ALR) was set up in 2002 and focuses on the promotion of freedom of association and the abolishment of forced and child labour in Myanmar. ALR provides trainings to workers about labour rights, labour laws and the formation of unions. Furthermore, ALR conducts research on labour rights issues, mainly in the garment industry. http://www.actionlaborrights.org/