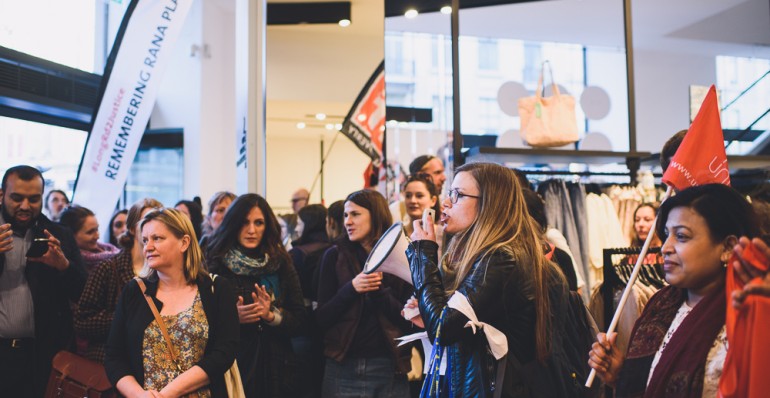 For Immediate Release
Labour Behind the Label and War On Want

A public walking tour along Oxford Street, London, will highlight the shameful role of high street brands in the two years since the Rana Plaza disaster in Bangladesh in which over 1100 workers died.

Fashion campaigning groups Labour Behind the Label and War on Want will lead fashion lovers from shop to shop highlighting the role UK high street brands such as H&M, GAP and Benneton have played in denying justice to Bangladeshi Garment workers.

Wearing white armbands, a Bangladeshi symbol of grieving, the tour will include stops at shops, performance poetry and audience participation, as the story of the Bangladeshi garment workers’ struggle for justice is told.

Owen Espley, Sweatshops Campaigner at War on Want said: “Two years after Rana Plaza, Bangladeshi garment workers have faced a long road to justice. UK high street brands have delayed paying desperately needed compensation and worked to undermine their struggle for safe factories. Whilst the public has been outraged the fashion industry has failed to step up and do the right thing. The movement for justice in the global fashion industry is growing day by day and will not cease until all workers’ rights are respected everywhere.”

Ilona Kelly, Campaigns Director Labour Behind The Label said: “It is shameful that now, two years on from Rana Plaza, there is still money missing from the compensation fund. Families are waiting in urgent need, with survivors unable to pay on-going medical fees, and yet high street brands continue to put profits over people and refuse to pay what they owe. Brands must be held accountable. Change in the fashion industry is urgently needed and long overdue.“

ENDS
Contact
Owen Espley (War on Want) on +44 7861362797                     www.waronwant.org
Ilona Kelly (Labour Behind the Label) on +44 7794271804       www.labourbehindthelabel.org
Notes
The walk will start at 6:30pm Hanover Square, [Where Vogue’s UK HQ is located] and then visit H&M, Benetton, & GAP.
The walk is organised by War on Want and Labour Behind the Label, and supported by Fashion Revolution, Potent Whisper, Rainbow Collective, The Brick Lane Debates ,TRAID & Traidcraft
A short video of the walk will be available at youtube.com/user/povertyispolitical on the morning of Friday 24th.
On April 24th 2013 over 1100 workers were killed and thousands injured when the Rana Plaza building in Bangladesh collapsed. Workers had noticed cracks in the buildings’ structure, but were compelled to return to work when threatened with loosing wages.
Benetton has been widely criticised for the delay and obfuscation in delivering compensation to the victims of the Rana Plaza disaster. More info: http://www.cleanclothes.org/news/press-releases/2015/04/17/ccc-believes-benettons-1-1-million-usd-contribution-insufficient and http://www.cleanclothes.org/news/2015/04/21/why-producing-a-report-doesnt-make-benettons-contribution-any-more-credible
GAP has been criticised for not signing up to the Bangladeshi Safety Accord. Instead it has promoted an alternative weaker agreement the Bangladeshi Safety Alliance, which is not legally binding, does not commit brands to ensure financing is available to improve safety in factories and critically does not involve trade unions and workers’ own representatives.
Photograph copyright Heather Stilwell