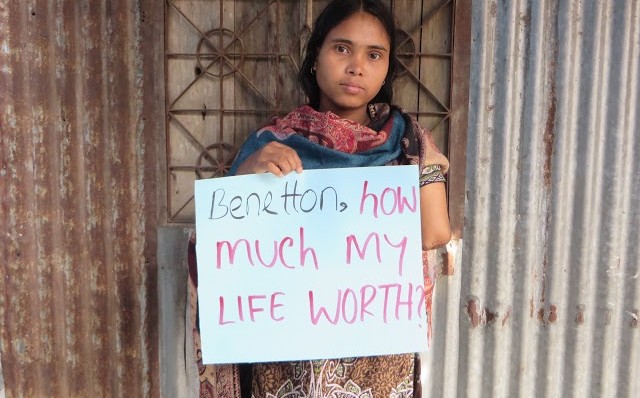 For Immediate Release, 08 June 2015
Victims of the Rana Plaza factory collapse to finally receive full compensation for loss of income and medical care

Labour Behind the Label is delighted to announce a major campaign victory with the confirmation that the Rana Plaza Donors Trust Fund has finally met its target of $30 million, following a large anonymous donation.

Labour Behind the Label, working with partners throughout the Clean Clothes Campaign, has been campaigning since immediately after the disaster in April 2013 to demand that brands and retailers provided compensation to its victims. Since then over one million consumers from across Europe and around the world have joined actions against many of the major high street companies whose products were being made in one of the five factories housed in the structurally compromised building. These actions forced many brands to finally pay donations and by the second anniversary the Fund was just $2.4 million dollars short of its $30 million target. A large donation received by the Fund in the last few days has now led to the Fund meeting its target.

“Finally, now that the Fund has received the required amount, all the families impacted by this disaster can begin to focus on rebuilding their lives. This is a momentous day,” said Sam Maher of Labour Behind the Label. “This campaign received so much support from across Europe and the world, with so many remaining thoroughly dedicated to this cause. This global support and action ensured that the victims of Rana Plaza were not forgotten.”

The Rana Plaza Donors Trust Fund was set up by the ILO in January 2014 to collect funds to pay awards designed to cover loss of income and medical costs suffered by the Rana Plaza victims and their families when the Rana Plaza building collapsed in the garment industry’s worst ever disaster.

In November 2014, the Rana Plaza Coordination Committee announced that is would need around $30 million to pay in full over 5,000 awards granted through the scheme. However, the failure of brands and retailers linked to Rana Plaza to provide sufficient and timely donations into the Fund has, until today, prevented the payment of the awards from being completed.

Labour Behind the Label and the Clean Clothes Campaign (CCC) will continue to support the Rana Plaza victims who are pursuing further payments in recognition of the pain and suffering inflicted upon them as a result of corporate and institutional negligence. These payments fall outside the scope of the Arrangement.

Labour Behind the Label joins with its partners in the CCC calling for policy changes to ensure that those affected by future disasters will receive more timely support. They welcome a new initiative by the ILO in Bangladesh to develop a national workplace injury scheme for the country’s 4 million garment workers. They also urge European politicians to develop better regulation of supply chains to ensure that brands and retailers are held properly accountable in the future.

“While this is a remarkable victory, the fact that it took over 2 years remains a travesty of justice and is an idictment of the the voluntary nature of social responsibility,” said Maher. “The brands connected to Rana Plaza earn a collective annual profit of over $20 billion. There is no excuse as to why it was so difficult to raise a mere $30 million in order to provide those with what they are owed for loss of income and medical costs. Let this be a lesson that we must develop new ways to ensure that access to remedy is provided by brands and retailers as a matter of course, rather than as an exception.”

Ilana Winterstein
Director of Outreach and Communications, Labour Behind the Label
ilana@labourbehindthelabel.org