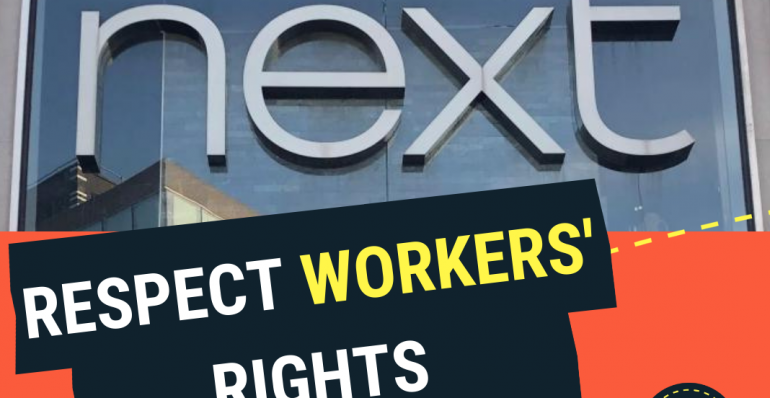 Over 1000 of you emailed Lord Wolfson, Next’s chief executive, asking him to formally recognise and engage with the trade union. We have temporarily closed this action, as Next are currently engaging on this issue. We hope to bring you an update soon.

UPDATE// We have temporarily closed this action, as Next are engaging on the issue.

Thank you for your solidarity with the Next workers who are forming a union in Sri Lanka. Your support is helping to ensure that workers voices are heard.

After several months, Next Plc has recognised the Free Trade Zones & General Services Employees Union in a letter to LBL and War on Want on 30 March. On 23rd April, a letter from Next Manufacturing pvt ltd (NML) was sent to the Joint Secretary of the union stating that “Next Manufacturing Pvt Ltd (NML) recognizes the formal request of a number of NML Katunayke plant employees to be affiliated members of the above named union.”

Since this formal recognition of the Free Trade Zones & General Services Employees Union from NEXT PLC and NML, we are waiting for the first meeting that is now being arranged between the NML and the union to recognise the Free Trade Zones & General Services Employees Union as the collective bargaining agent before we close our petition.  As of today, NML have been slow in setting a concrete date but the massively rising cases of Covid-19 in Sri Lanka is hindering face to face meetings. We continue to be concerned at anti-union material being circulated, and continue to lobby Next behind the scenes.

In January 2021, following a successful action to win back unpaid bonuses, workers at a factory owned by Next formed a new branch of the FTZ&GSEU trade union. Workers reported intimidation, threats and discrimination, but stood firm and until nearly half the workers were members.

Despite multiple requests from us and War on Want, Next did not recognise and engage with the workers’ trade union.

Next’s failure to recognise and engage with the trade union was a flagrant display of disrespect for their workers’ rights. Next fell below its own published principles for workers’ rights and they should be accountable for this.

In December 2020, before the trade union branch was set up, the workers walked out over unpaid bonuses – money workers rely on as their poverty wages are not enough to survive on. As a result of this collective action, Next agreed to pay up.

Worker’s must be able to form unions in order to negotiate with their employers. It is essential in the fight for better working conditions for garment workers that Next formally recognises and engages with the workers’ union, respecting and not undermining their right to collective bargaining through a trade union they have freely chosen to join.