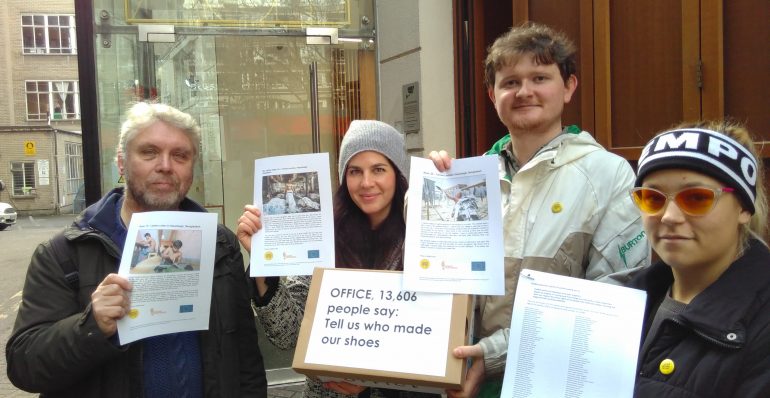 Labour Behind the Label
6 December 2017

13,606 people have called for leading UK shoe brands and retailers to step up and tell us who made our shoes, and to stop endangering the lives of the people who make them.

The petition, organised by Labour Behind the Label and the Change Your Shoes coalition, was delivered to 11 brands in the UK and 15 brands across Europe, on behalf of thousands of citizens who want to know that their shoes are made by people who do not risk their lives when they go to work each day.

24 billion shoes are produced every year – three pairs for every person on the planet. 87% of shoes are made in Asia, where millions of women homeworkers stitch shoes for our high street stores but endure extremely low wages, health problems and insecure work. In leather tanneries, the use of toxic chemicals and dyes can expose workers to toxic substances, including Chromium 6 which can cause asthma, eczema, blindness and cancer. When it transfers to waste water it causes harmful pollution to the environment and to those living and working nearby.

Increasing demand from Europe, and competition between brands to provide the cheapest, fastest products, means shoe workers in Asia and Eastern Europe are under pressure to produce more and more, often working unpaid overtime in factories and facing dismissal or intimidation if their try to speak up for their rights. These poor working conditions are hidden from us because most brands keep their supply chains a secret.

But now citizens across the UK and Europe are waking up to these problems, and want to know that their shoes are not harming people or the environment. Thousands of people are calling on big brands to publish information about where their shoes are made, to stop using toxic chemicals in the production process and to provide living wages and decent working conditions.

Nicola Round from campaigning group Labour Behind the Label said, “In London, Debenhams received our petition and said they are on track to publish their supplier list online this year. This is a welcome step towards greater accountability and we look forward to meeting them again soon. In Livingston, UNISON Scotland handed the petition to Schuh who said they are open to our recommendations. In Manchester we were joined by local group Stitched Up to hand the petition to Boohoo.com, who have so far not provided an adequate response to the concerns raised in the petition. Harvey Nichols in London also received our petition and we look forward to further discussions with them.

“But we are disappointed that Office Shoes declined to receive the petition in person, and have so far failed to respond to the campaign despite letters, emails, phone calls and a personal visit from campaigners. We are concerned that a leading brand appears to be actively ignoring questions from a growing number of citizens about the conditions in which their shoes are made. We will continue to try and speak to Office about their supply chain and about steps they can take to identify risks and protect workers’ safety and rights.

“We’ve handed each of these brands a shoe box containing the petition signatures, along with testimonies from workers in India and Bangladesh to show the reality that shoe workers face each day. Rizia, a tannery worker in Bangladesh, earns less than £40 a month and says she cannot sleep at night because of the itching on her skin. Selvi, a 21-year old homeworker in India earns just 6-7 pence a pair for stitching leather uppers for shoes, hard work which causes pain in her shoulders. We want brands to investigate and identify risks to workers in their own supply chains, and take steps to improve conditions for the people who make their shoes.

“The petition has also been sent to Asda, Boden, Dr Martens, Sports Direct, Primark and Very.co.uk. Boden and Dr Martens have replied to our original letter, but we are awaiting a full response from the other brands.”

Ms Round said: ““The growing movement for transparency cannot be ignored. A parallel petition calling on global garment brands to be more transparent, including Primark, has received over 70,000 signatures.

“As a result of public pressure, major brands have this year committed to publishing supplier information, including Clarks in the UK who responded positively to an earlier letter from us about the need for greater transparency. Many brands are still not keen to talk about working conditions, and there is still a long way to go until workers in the shoe industry get a fair deal. But it’s promising that some big brands are now waking up and see that the only way forward is to listen to customers’ concerns and workers’ needs, and show they are willing to be held accountable. We will continue to work with shoe brands to improve supply chain transparency and working conditions, to stop workers risking their lives for poverty wages every day to make our shoes.”

The Change Your Shoes coalition presented the petition to MEPs in Brussels on 20 November, demonstrating that there is public pressure for change in the shoe industry, and calling on the EU to make it mandatory for companies to disclose the names and addresses of their suppliers.