The Right to a Living Wage 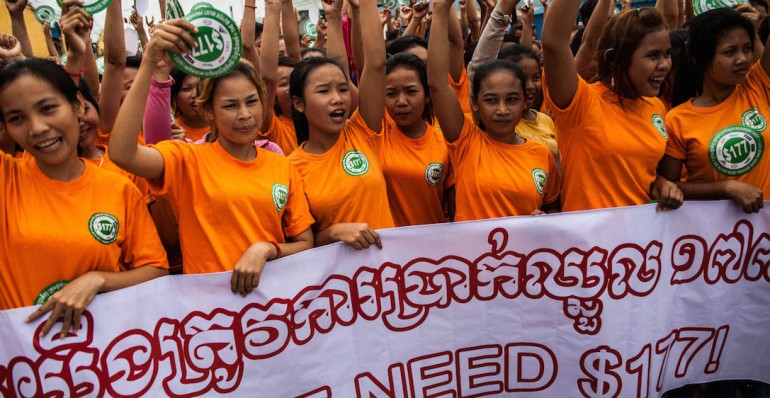 Everyone has the right to a standard of living adequate for the health and well-being of himself and of his family, including food, clothing, housing, medical care, necessary social services, and the right to security.

The global fashion industry is worth over £36 billion per year in the UK, and yet the majority of its workers rarely earn more than two dollars a day.  Many have to work excessive hours for this meager amount and struggle to properly feed, clothe and educate their families.  In many cases, garment workers earn less that the national poverty levels set by governments and international organisations.  This situation is further antagonized when prices paid to suppliers are cut by brands and retailers.

When challenged on the wage issue, most companies claim that workers in their supply chains should be paid the minimum wage or the industry standard in that country, whichever is higher.  But this isn’t enough.  Minimum wages, usually defined by governments, are set in the context of ferocious competition and consequently often fall well below these governments’ own poverty thresholds.  Furthermore, a minimum wage is often well below what is required for decent living standards and research indicates that many suppliers are not paying this legal minimum.

The problem is complicated further when the millions of piece-rate workers and homeworkers within the industry are considered.  When workers are paid for the number of garments they produce, rather than the number of hours they work, it becomes near-impossible for them to earn a living wage during a working week.  This informal employment makes workers more vulnerable to seasonal variations in work and often means they lose out on security payments, such as pensions or health insurance. Workers have reported that there is often a delay in wage payments, which means they are then forced into debt in order to avoid losing money.  The garment workforce is 80% female, and many of them have responsibilities as parents or carers for other family members.  Many young people travel from the countryside to work in the garment industry and rely on sending their small wages back to their families.

Labour Behind the Label believes that workers are entitled to be paid a living wage.

This is defined as one which provides workers with a discretionary income that meets their needs for nutritious food and clean water, shelter, clothes, education, health care and transport. It should be enough to provide for the basic needs of workers and their families, to allow them to participate fully in society and to live with dignity.  It should take into account the cost of living, social security benefits and the standard of living of others nearby. Finally, it should be based on a standard working week of no more than 48 hours, before overtime, and should apply after any deductions. Overtime hours should be paid at an overtime rate and this should be properly and clearly recorded on a wage slip.

Positive steps are being taken in the campaign for living wages.

Many companies now have Codes of Conduct which outline the standards that they commit to upholding.  However, many of these practices are having little effect in the communities that are in desperate need of change.  In Bangladesh, wages have fallen by as much as half, despite increased consumer spending on clothes.  Companies need to investigate why their apparent commitment is not having the effect it should, as many workers still struggle to survive on the breadline.

Until recently it had been difficult to define a living wage.  The Asia Floor Wage Alliance uses the same definition of a living wage as Labour Behind the Label and takes this forward to calculate a pan-Asian ‘floor wage’ – literally a base level wage – which should function regardless of nationality, gender or workplace to provide a singular minimum living wage figure for all workers across the Asian garment industry.

It is certainly becoming increasingly necessary to adopt an agreed ‘floor wage’ across the whole industry.  The threat of relocation if wages and other costs increase contributes to the sense of fear that prevents workers from joining trade unions.  Many companies are wary of adopting a living wage for fear it will mean being priced out of the market.  Furthermore, factories that produce lines for a variety of retailers refuse wage changes that would complicate their pay system, particularly if they were expected to pay higher wages for the production of certain lines.  Only by working together can the brands end the downward spiral in the prices on which their competitiveness depends.

A ‘floor wage’ should give suppliers the confidence to negotiate prices that factor in a living wage, and to set meaningful minimum wages that will benefit the workers.